Megaways™ slots have revolutionized the online video slot game market and have arguably changed the way players think about slots and the way developers design them. So what is it about the Megaways™ game engine format that makes it so popular and keeps players coming back for more?

Megaways™ is a trademark from Australian developer Big Time Gaming (BTG) and has since been licensed out to other slot developers such as Blueprint Gaming, Red Tiger, Kalamba and Relax Gaming. There is an ever growing number of slots titles using the Megaways™ format which suggests this game mechanic has become incredibly popular amongst casino slot players.

The Megaways™ idea is really a natural progression from the original IGT Multiway concept which we’ve now come to know as 243-way slots as that’s what the orignal ways limit was over 5 reels of 3 rows. Between then and the Megaways™ era we’ve seen 5×4 slots of 1024 ways, 6×4 slots such as Raging Rhino with 4096 ways, so now you see the difference – those games have fixed numbers of winning ways, Megaways™ do not as they have dynamic reel rows. 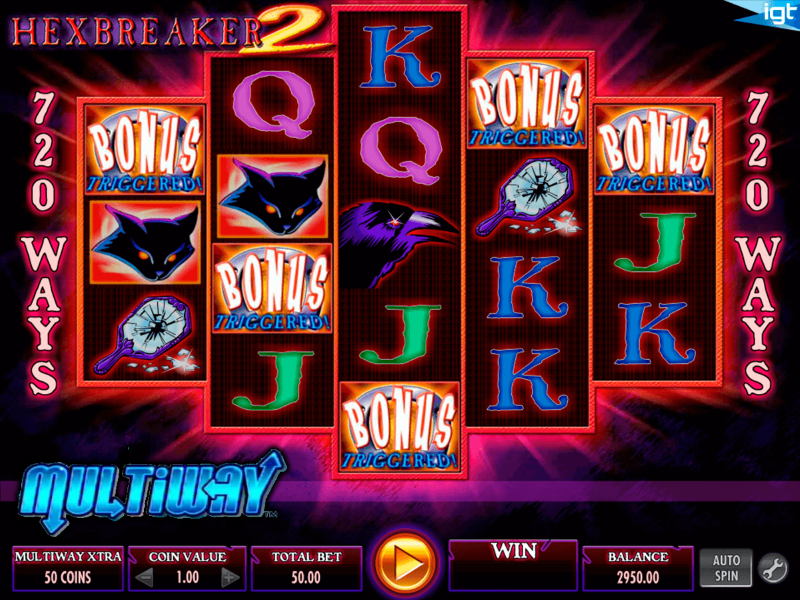 Hexbreaker 2, a classic example of a Multiway slot from IGT

Dragon Born slot was the first to use this Megaways™ mechanic back in 2015 and you must have heard of the most successful title to date, Bonanza, released in 2016. Since 2018 BTG games have appeared via the Scientific Gaming platform alongside WMS, Nextgen and Bally and are now available via Microgaming’s Quickfire interface too.

Megaways™ is a very versatile model as the main selling point is the fact that the reels vary in rows for each spin. These dynamic reel rows mean the screen constantly changes for the player as each reel can independently contain from 2 to 7 rows on any given spin. The end result is a slot which can offer 64 up to a maximum of 117,649 ways to win per play. Some, like Bonanza and Diamond Mine, have a separate scrolling reel of 4 symbols above the centre 4 reels which means a minimum of 324 ways as opposed to 64.

The symbols can appear stacked too in any quantity from 1 to 10 or more rows each reel depending on the maths model and pay allocated to each icon. Obviously the reel maps are incredibly long and complex and the combinations possible for each Megaways™ slot run into the tens of billions so predictability tends to be low and variance high on these slots. Maps may differ per reel, i.e. it may be possible to see full rows of 7 containing the same symbol on one or two reels but not the rest. This is to prevent having volatility overkill as if you landed all of the same icon on a 117,649-way spin it would generate a colossal win of hundreds of thousands times bet which would take a huge chunk of the overall RTP from other players! 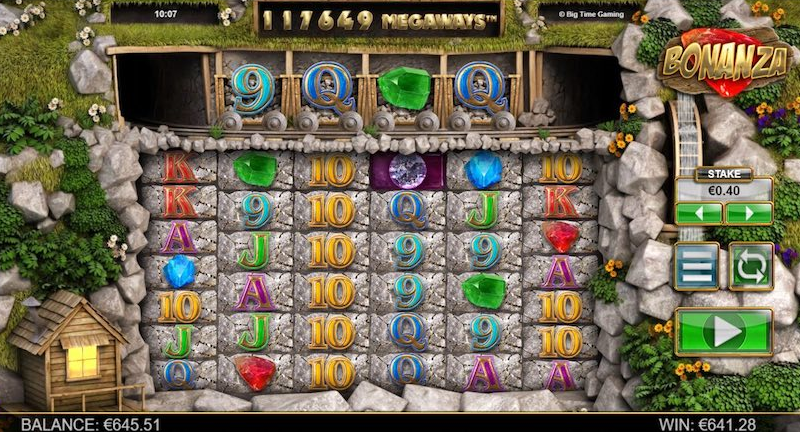 Bonanza slot, possibly the most popular online slot ever built

Nevertheless, wins of thousands to tens of thousands times bet are possible and have been seen on a regular basis since the inception of Megaways™ slots, this is the other main selling point – the belief by players they can see wins not possible on many other game mechanics.

Most Megaways™ games will have the winning combinations removed from the reels and replacement tiles drop down, resulting in the possibility of multiple successive wins on one spin. Scatters may also appear during this cascade therefore triggering a bonus from a position where you didn’t have the sufficient amount of scatters already in view.

The Megaways™ slot examples above all have six reels offering up to 7 rows apiece on any spin. There are variants which reduce the maximum rows to 5 per reel such as Blueprint’s Genie Jackpots Megaways™ so you have a maximum of 15,625 ways which reduces the volatility somewhat and allows the use of enhancements like stacked Wilds or random Wild features.

You can get two identical Megaways™ slots and simply change the volatility by reducing or increasing the stacks available on the reel maps, so the versatility of the Megaways™ mechanic is unlimited. Some may have mystery stacks added as is the case with Red Tiger’s Mystery Reels Megaways™ and Blueprint’s Buffalo Rising. Red Tiger actually released a slot called Laser Fruit which could expand the reels to 10×6 in the feature and create a grid offering an incredible 60 million ways, although this isn’t an official Megaways™ slot.

So as well as the distinctive Megaways™ slot reel dynamics and visuals as a result, what is the common attraction? We’ve already mentioned the volatility and chances of huge feature wins, but the amount of ways and stacked symbols can combine to yield some large wins in the base game too. You will find in most cases that the base game pays around 70% of the slot’s RTP which is necessary in order to give the player some decent turnover for their money to compensate for the volatile features and their win potential. The offshoot of this is lower feature frequency in most cases, lower than you would see in most standard slots.

Nearly all Megaways™ slots will offer free spins, usually in just one format. The enduring modifier is the increasing multiplier for every winning action on the reels which proved so popular and exciting whe players first saw Bonanza and Extra Chilli. Combined with the multiple winning ways possible, the potential for wins of many thousands times bet is the result and a huge draw for slotters. 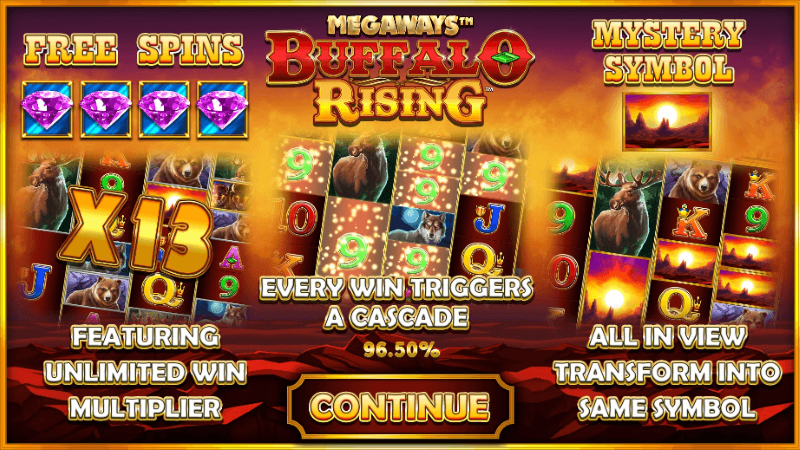 Choosing your feature on Buffalo Rising is not always easy…

Holy Diver and Primal Megaways™ use random Wild multipliers to achieve pretty much the same effect while Extra Chilli and Mystery Reels allow feature gambles to start, or not start, with more spins. White Rabbit simply expands the reels in the free games to increase the ways available and win amounts up to an astounding 248,832 ways.

Megaways™ slots have become a massive success for the games providers despite their expensive and complex development requirements. The flexibility of the dynamic reel rows combined with endless mathematical and feature variations is providing a substantial source of ideas as we have seen. Already we can safely say that the Megaways™ mechanic is heading to be the most enduring slot design ever, even more so than the numerous versions of Buffalo slot and Book of Ra Deluxe that have been produced up to now.

You may either love them or hate them, but one thing’s for sure – you won’t see the last of them for a long while yet…