Buffalo Rising Megaways™ slot game takes players on a journey to the baron landscapes of the North American plains, home to a variety of wild animals. The theme here of Buffalo’s has been seen before, made famous by Australian developer Aristocrat’s Buffalo slot machine. The graceful wild beasts of full of mystery and majesty, which possibly makes them a perfect creature to be the theme of a video slot. The reels of Buffalo Rising are set against a canyon scenery with different wild animal symbols, including the Buffalo, on the reels. Buffalo Rising Megaways™ has a number of interesting bonus features, making it a popular title from Blueprint Gaming. 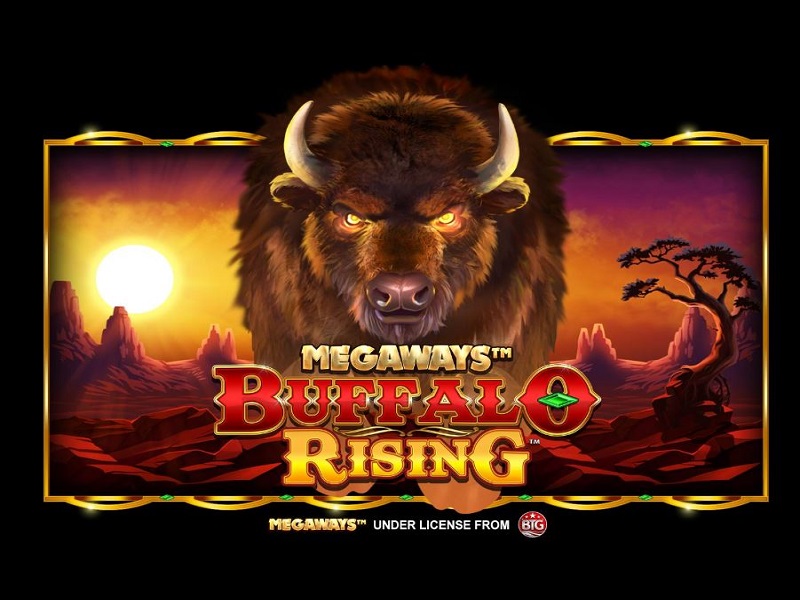 The free play version of Buffalo Rising is exactly the same as the real play version. The only difference is you are not playing for real money. You can still get the feel of the Buffalo Rising game in this mode and understand how all the bonus features work (should you play it for long enough!). Blueprint Gaming did not develop the Megaways™ game engine, but instead use it under license from Big Time Gaming. You will notice that it still play’s very similarly to other Megaways™ slots, its just from a different developer.

Buffalo Rising slot is another edition by Blueprint incorporating the BTG ‘Megaways™ License and follows hot on the heels of Diamond Mine and Irish Riches. Buffalo Rising has a feature variation you can choose which we’ll come to later but for now we have a theme of the North American prairie alongside matching tribal music as we play. The game is essentially a remodel of Bonanza slot but this Buffalo does have one or two bells and whistles!

The scrolling reel of 4 symbols lies above the middle reels here instead of below as with Extra Chilli so Buffalo Rising therefore offers up a minimum of 324 and maximum of 117,649 ways on any given spin. Symbols appear stacked and singly bar the Wilds which only appear on the scrolling reel and Pink Diamond scatters can land on any reel. You may also see mystery symbols land anywhere on the grid in the form of sunsets, which all reveal the same icon before any wins are calculated.

The line pays are highest for the Buffalo naturally at 50x bet for a 6-of-a-kind then Grizzly Bear at 7.5x, Wolf or Moose at 2x and finally six card values decreasing from 1.75 for the Ace down to 0.8x for the 9. As you’d expect for this mechanic, winning tiles disappear from the reels and are replaced by cascades from above.

Land four or more Pink Diamonds appear at any time during play, you are awarded a feature select with 4 options. You get free games with an increasing multiplier for each action. The options you choose from are 5 spins beginning at 10x multiplier, 10 spins beginning at 5x and 15 spins beginning at 1x. Any extra scatters over the 4 necessary for triggering will start those spin amounts higher. You can also earn 5 or 10 extra spins on the scrolling reel for 3 or 4 Diamonds respectively. Mystery symbols tend to appear more frequently during the bonus to help you get those huge hits that are possible!

This is a simple feature buy to get the bonus above for 100x bet.

Buffalo Rising doesn’t get any prizes for graphics, sounds and animations but we get a good RTP of 96.43% and the option to choose your free spins bonus is a good idea. You may not agree with paying 100x bet for a feature buy and I certainly wouldn’t recommend doing so either. Without it, the feature frequency is low at over 450 spins on average which is standard for this type of Megaways™ slot. It can surprise you in the free spins but somehow for me it doesn’t have the raw excitement Bonanza offers, but you may disagree. 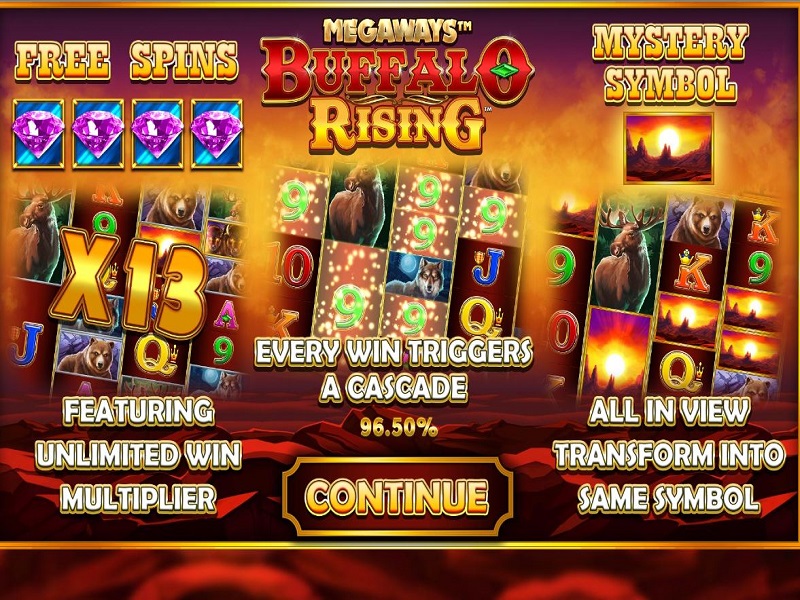 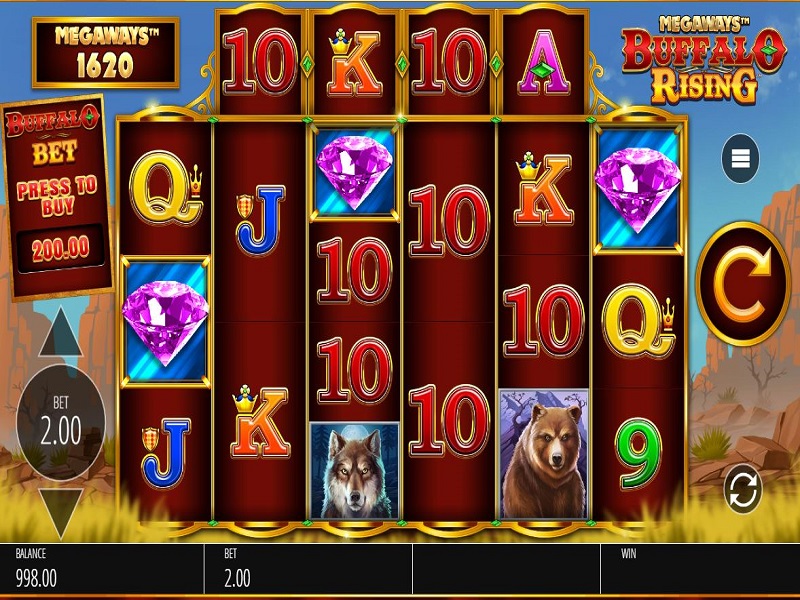 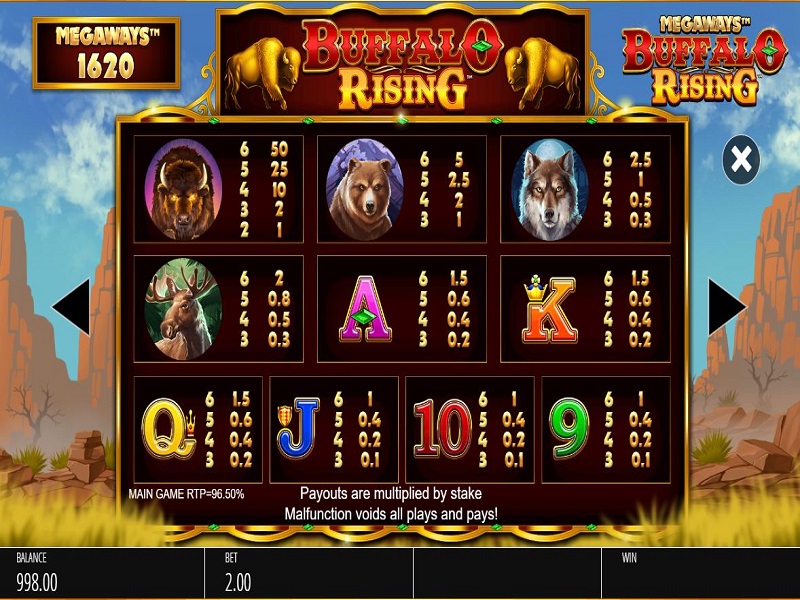 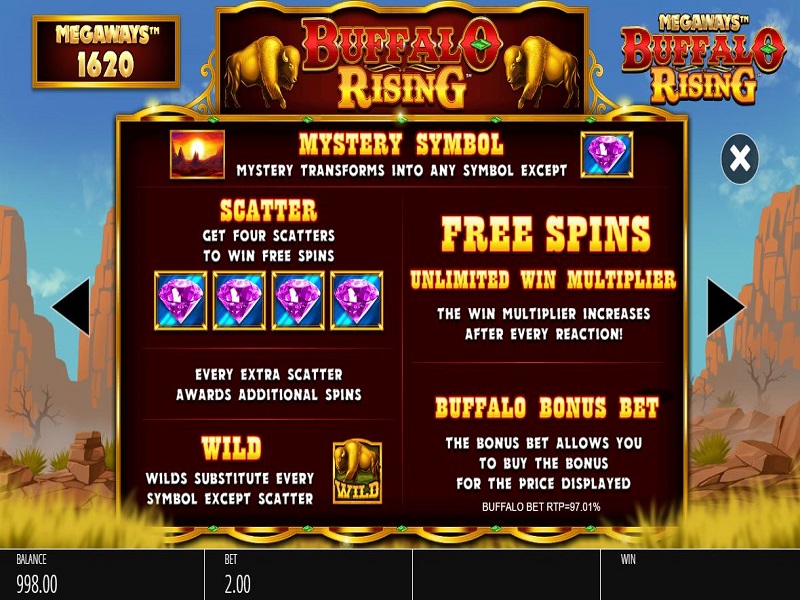 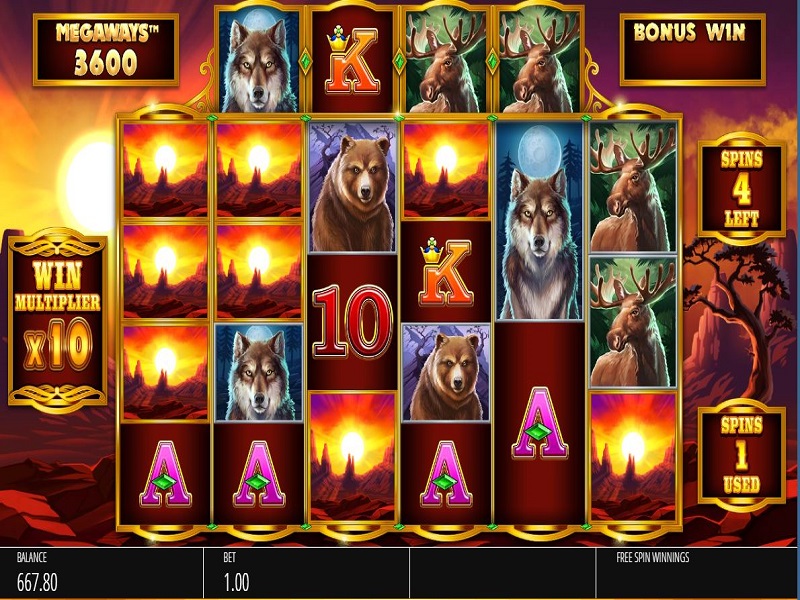 Through a deal signed between Blueprint Gaming and Big Time Gaming, the Megaways™ game engine is enjoyed in several video slots from this particular developer. Buffalo Rising was one of the earliest titles to employ the Megaways™ engine, and has led to several more following it. With the Megaways™ system deployed, Buffalo Rising slot offers 6 reels and up to 117,649 combinations to win, though this number varies from spin to spin. The super big wins of 10,000x are well and truly possible, and in part the likelihood for this potential will come from the slot’s free spins feature, multipliers, scatters and mystery symbols during play.

It is worth noting that the graphics are not the most impressive we have seen from this developer , but the theme is tried and tested, focusing on buffaloes and other wild creatures who live on the North American prairies. The brown bears, elks and wolves all play their part in this nature-themed game. Soft pan-pipe music gives a native feel to Buffalo Rising, although not going so far as to connect the game to Native Americans. Pink diamond symbols and many basic-looking Royals fill the gaps between the wild animals and bonus symbols. Buffalo Rising Megaways™ is a good attempt by Blueprint Gaming, and slot fans who enjoy high volatility games may choose to try and unlock the huge potential.