Diamond Mine slot is a 6-reel title from Blueprint Gaming featuring the Megaways™ game engine. The theme is all about striking gold in this diamond mining mission with up to 117,649 combinations to create a win. The game includes cascading symbols and an unlimited Win Multiplier throughout the Free Spins feature, which grows with each win. Keep an eye out for the TNT Symbol, all those that are in view will explode revealing the same random symbol and potentially some very big wins. 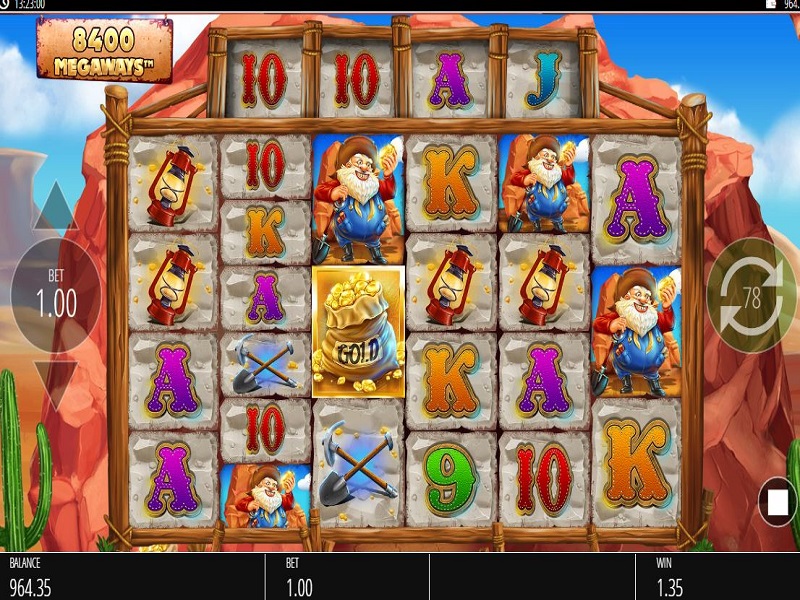 If you want to play Blueprint Gaming’s Megaways™ slot for free then you can do so, as there is a demo version of the game. You do not need to download the game or sign up to an online casino, simply click the button and start playing. Playing Diamond Mine for free can help you understand the game better and offers the player a chance to get to grips with the various features of the game. As a Megaways™ title, some of the game play will be very familiar to lovers of slots like the mining-themed Bonanza slot or the North American-inspired Buffalo Rising.

Diamond Mine slot is Blueprint’s first licensed version of BTG’s Megways engine and as such they were careful to keep it familiar to players with essentially the same game as Bonanza or Extra Chilli. The theme is even very similar with an American Gold Rush mining one as opposed to Bonanza’s Australian mining theme. You have similar yee-hah! music on the banjo but here they’ve replaced the gems with mining icons and tools and overall the game takes on a cartoon appearance. I don’t know if you can mine any diamonds here, but it looks promising anyway!

You have 6 reels of 2 to 7 rows each on any given spin including a scrolling bar of 4 single symbols above the 4 centre reels, therefore there are from 324 to 117,649 ways possible. The Wilds can only appear on the scrolling bar and like Irish Riches Megaways™ you see gold bags on the grid which act as your scatters. Symbols appear stacked and single and of course any winning ones will explode to be replaced my more cascading from above. Top pay is the Diamond at 50x bet if you are lucky enough to see 6-of-a-kind which I have to say is very rare indeed.

The equivalent of Bonanza’s coloured gems are the Miner, Pickaxes and Lamp with the same pays again of 7.5x, 2x, 2x. The card values are the same too paying 1.75 down to 0.8x for Ace through 9. Blueprint have thoughtfully added a mystery symbol though in the form of TNT Barrels which can appear randomly on the reels in varying quantities all to reveal the same icon bar the scatter.

Land yourself at least 4 Gold Bag scatters to earn 12 free games in which every single win increases the multiplier by 1 without a limit. You may see up to 8 scatters in total, especially if you have more cascades after the initial 4 are already in view. Each extra scatter adds 5 extra spins to a maximum trigger of 32 and in these free games they can only appear on the scrolling reel above, where 3 or 4 will award 5 or 10 extra spins. You tend to see more mystery Barrels in these spins too. Get ready for some explosive wins here!

Considering Diamond Mine slot is identical to Bonanza aside from the added feature of random mystery symbols and a slighty higher at RTP 96.43% which is an improvement over Bonanza’s 96.00%, it has gained a lot of fans. Many prefer it to Bonanza for those reasons and the different theme, but I personally find the symbols here hard to follow compared to the simpler ones on the eye that game has. I’m attracted by the mystery symbol addition but not so much by the symbols themselves. For that reason Bonanza still has the edge for me, but I’d still play this again – it’s quite good. 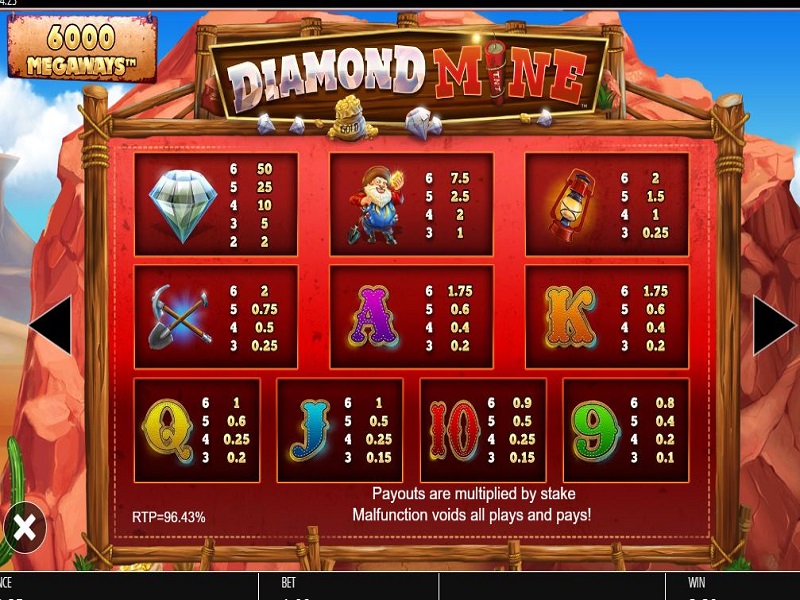 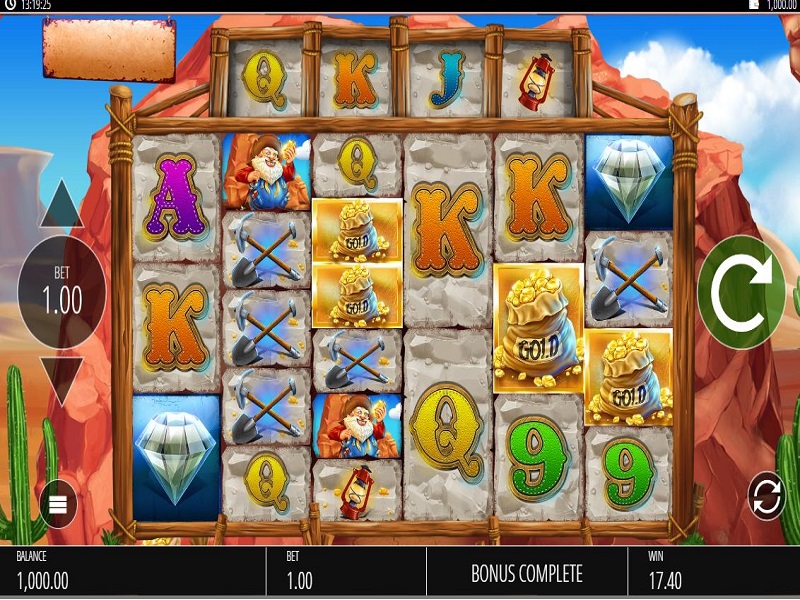 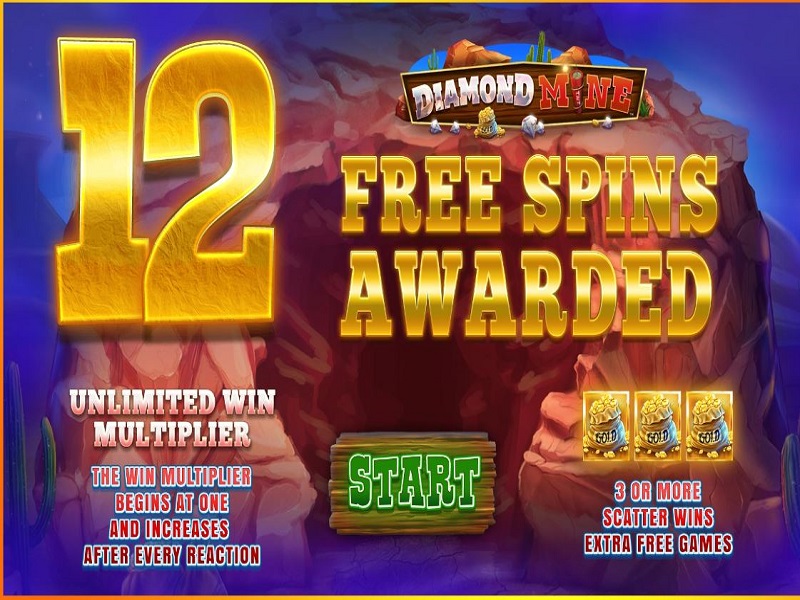 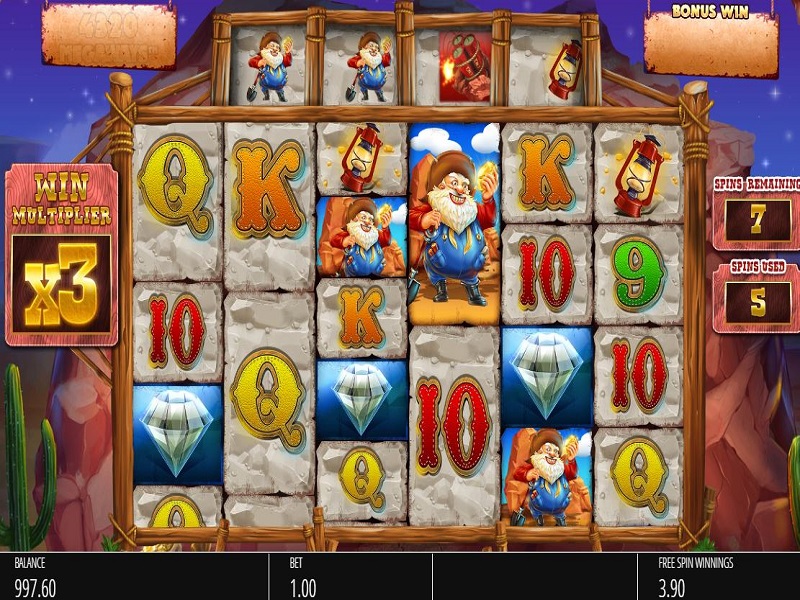 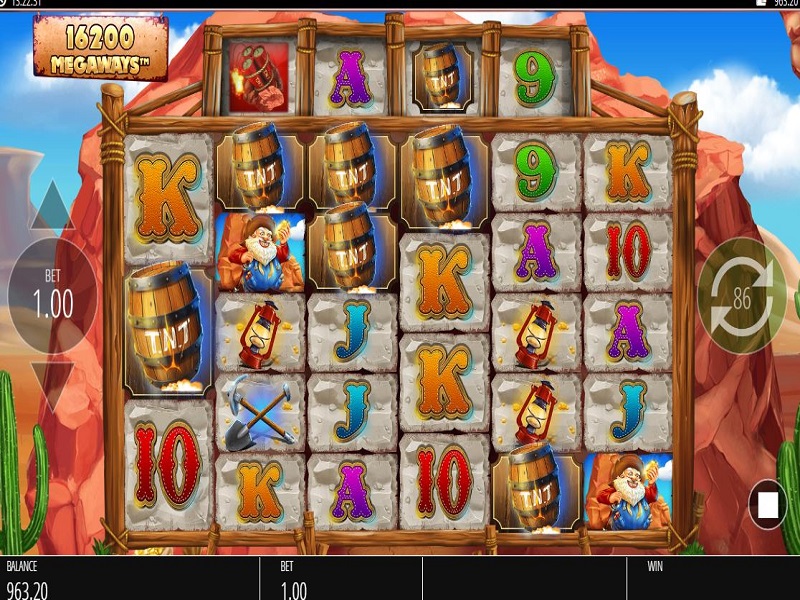 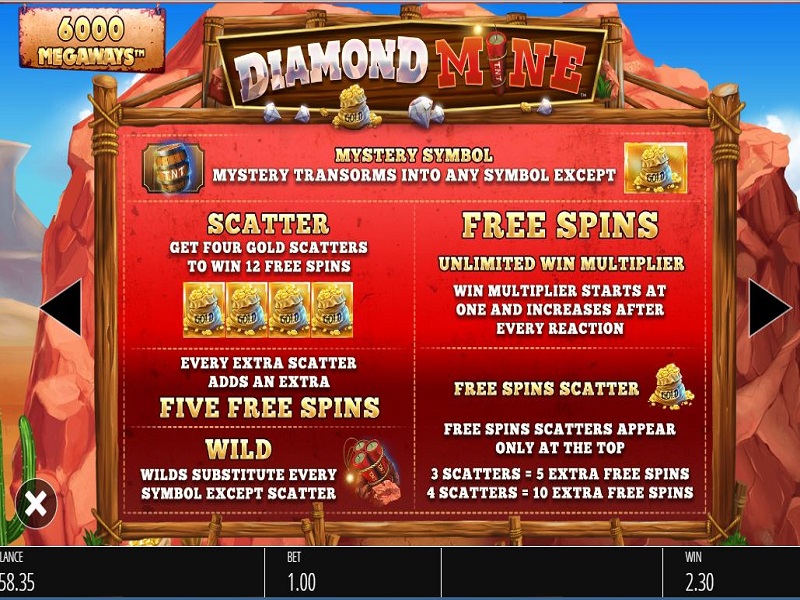 Blueprint Gaming has come from a relative unknown to a big international concern. This is largely due to being bought out by a larger group, who helped back the company in terms of talent and money to spend. Their popular slots now include a good selection of Megaways™ slots, including Primal and Vikings Unleashed. Blueprint offer slots to suit all tastes, from complex, multiple features to simple branded games. Most of Blueprint Gaming slot games are available online through a mobile device or on a desktop machine.

Blueprint Gaming’s Diamond Mine Megaways™ slot game presents players with a staggering 117649 ways to win with each and every spin of the reel. This game is fun and exciting and provides those that play with a generous free spins bonus round, along with all sorts of great additional features such as cascading wins and those increasing multipliers.

The bonus features in Diamond Mine are quite simple, but at the same time they are also very interesting. The free spins, which include cascading wins and increasing multipliers, offers players a chance for some very big wins. With 117 649 ways to win, Diamond Mine so many opportunities to scoop the top prize of 10,000x.