Dragon Born Megaways™ slot by Big Time Gaming was officially released on 1st February 2016, and ushered in a brand new era for of online slots as the Australian developer introduced the world to the Megaways™ game mechanic and the slot playing community lapped it up.

Dragon Born offers a medieval theme with Dragons, Knights and ancient castles. It’s very much the stuff of fantasies, but there is always an appetite for this type of game. It is played over 6 reels with between 2 and 7 symbols on each reel. What Dragon Born brought to slot gaming, which we had not seen before, was 117,649 ways to win. 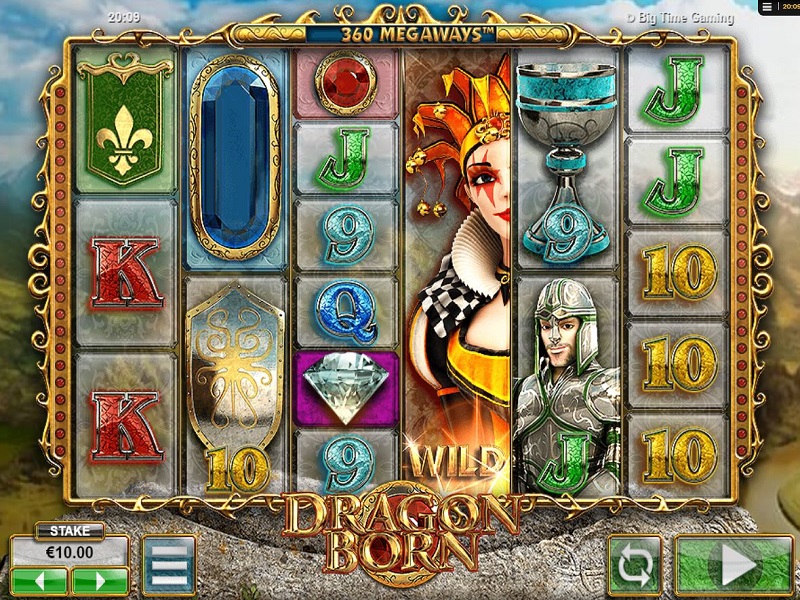 Playing Dragon Born for free is a good idea, especially if you have not played any Megaways™ slots in the past. This slot is highly volatile slot game with an RTP of 95%, which is a little on the low side as online slot RTP’s go. The stacked multiplier wilds and a very exciting free spin bonus round are where the big opportunities can be found in this game. Therefore, it makes sense to find out how these features occur or are triggered. This can easily be done in the free demo version of Dragon Born.

Dragon Born slot was the first Big Time Gaming Megaways™ game and although good at the time, I think the subsequent Megaways™ games are better. That said, in itself it isn’t a bad game at all with it’s neo-medieval appearance and bright colours with gentle music while you play. As with Starquest and Queen of Riches you have some serious big-win possibilities too although those two can pay far more and don’t have a triggered feature. What kind of fire can this old dragon offer us?

Dragon Born has the Megaways™ concept in its purest form as there is no scrolling reel as you see on Bonanza and Chilli but a simple random row amount of 2 to 7 on each spin. This means you can see 64 to 117,649 ways in play on any game with all symbols bar the scatter being stacked in various quantities according to their value. The Dragon is the best paying for all 6 reels at 50x bet and the familiar red, blue or green gems pay from 5 down to 3x for 6 and thereafter six card values of which the lowest 9 pays 0.8x. There are no Wilds at the moment but Diamond scatters appear on all 6 reels.

You need 3 or more Diamonds anywhere to trigger these and you get 6 spins for 3 up to 50 spins for all 6. No retriggers but any Diamond landing will add 1 extra spin to your remaining total. The enhancements here are twofold; firstly you play all the bonus of full 7-row reels and 117,649 ways and secondly single Wilds are added to the middle 4 reels. As with the base game, you get a slowed anticipation spin if a good win is going to drop in.

Dragon Born may seem a little tired and rather tedious as it lacks the excitement of the later Megaways™ games without doubt. That said, you do get a free spins bonus with some potential although in my experience big wins aren’t usual and it often disappoints. You may get the odd big win in the base game, but generally Dragon Born is a pretty plain game once you understand it and the RTP is lower than other Megaways™ slots at a mere 95%. For me, one for the slot archives. 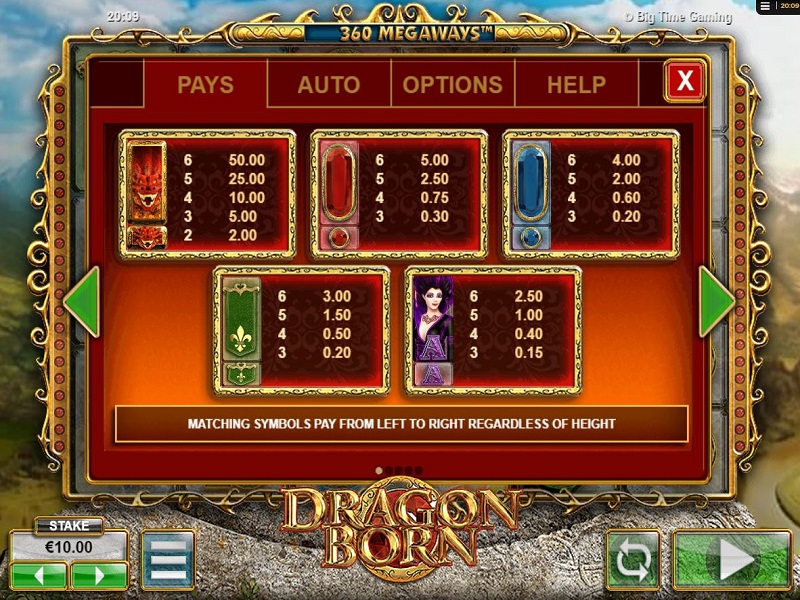 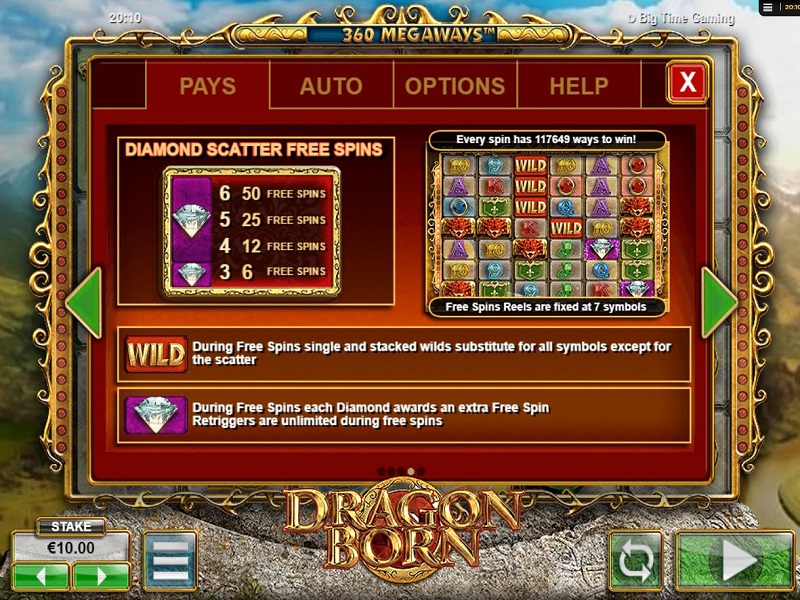 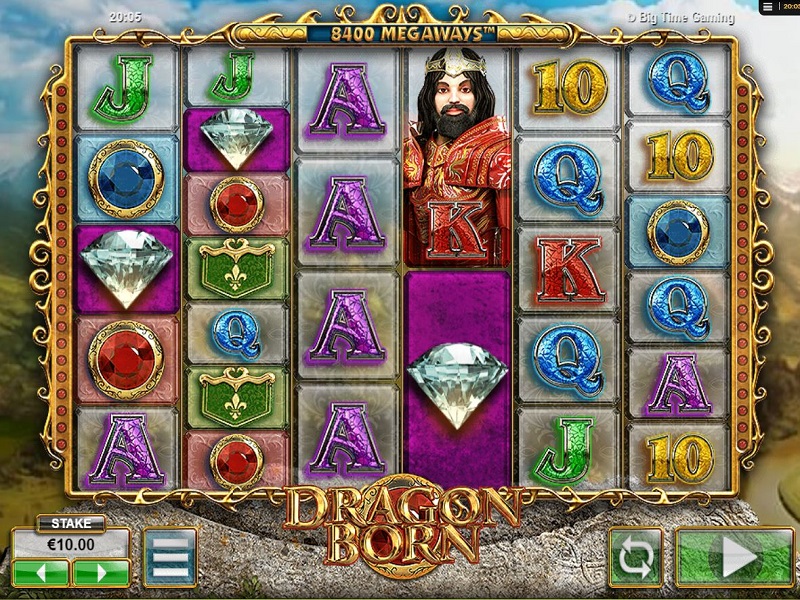 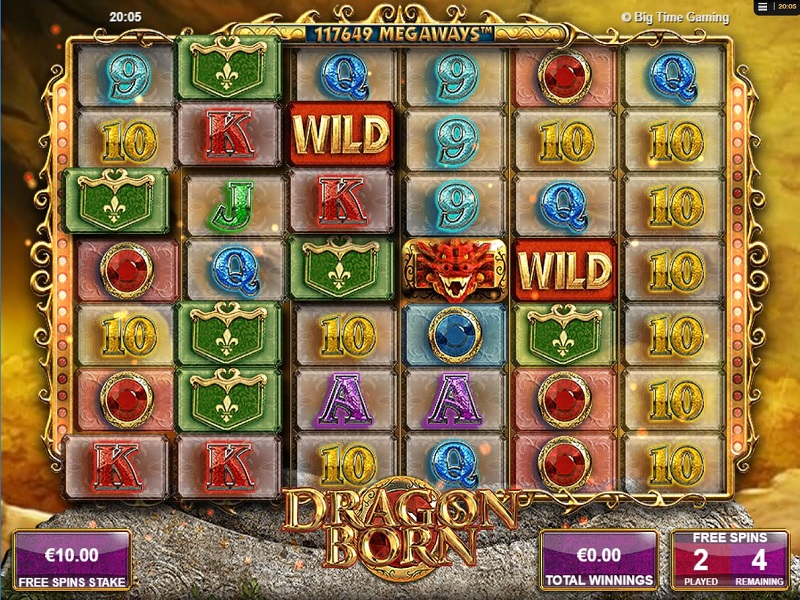 The background to the Dragon Born slot is a majestic landscape of pristine lakes, rolling fields, snow peaked mountain tops set below a clear blue sky. The detail of the artwork by the developer BTG is first class, and can be seen in the dramatic symbols and interesting game board.

Keep in mind that with all Big Time Gaming’s Megaways™ slots, and Dragon Born is no exception, with all their beauty they also come with a lot of bite. The 117,649 potential ways to win does make it sound like its impossible to not win. However, most Megaways™ slots will drain your bankroll if you don’t play with a smart head on you. Chasing the big wins in these Megaways™ slot games is not recommended.

Dragon Born is definitely a game changer of a slot – although that is largely due to the fact that it introduced us all to Megaways™. This game mechanic was later catapulted into the stratosphere by the mining-themed slot Bonanza, but Dragon Born was the first…

The game contains fully stacked wild multipliers which keep the base game going. The vast amounts of ways to win when in the free spins round can generate some very big wins. The extra free spins gained by seeing diamonds can improve your wins and there is no limit on what can be achieved. Do remember that this game is very volatile, so we recommend to play well within your limits here.