Whether you love spicy food or not, you are likely to get a kick out of the Megaways™ slot Extra Chilli from Big Time Gaming. This follow-up to the irrefutable Bonanza online slot was always going to have a lot to live up to, as it was arguable being compared to the most popular video slot of the modern era. However, Extra Chilli has created its own audience, possibly due to the subtle differences to its predecessor. The Megaways™ game engine is always a huge draw to fans of these format games, as they offer huge winning potential and many many ways to win. The bonus features especially seem to draw players in as they take their chances to win something very memorable. 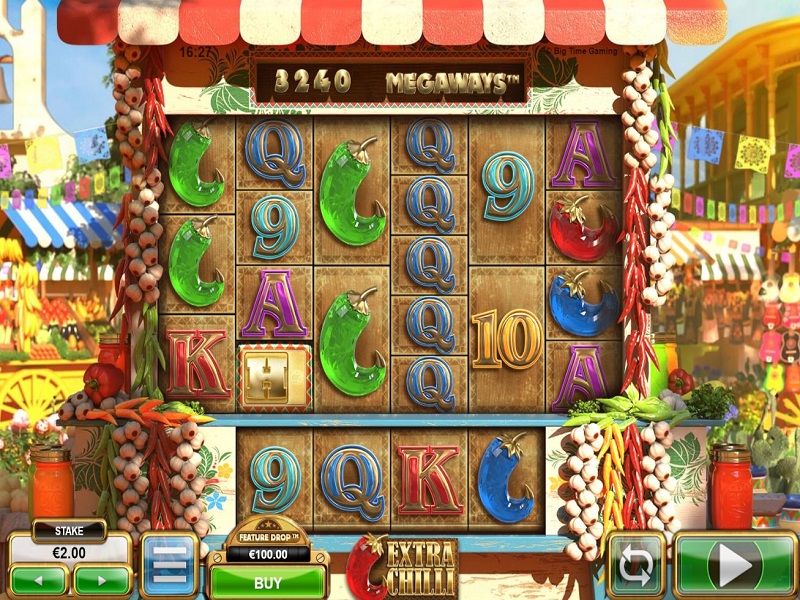 It is possible to play Extra Chilli slot for free and experience all the same gameplay you would in the real money version. You may have different reasons for wanting to do this, but possibly the most obvious one is that you might want to get your head round the ‘feature drop’, which is explained in more detail in the review of Extra Chilli below. The feature drop is also available in other Megaways slots™ such as White Rabbit and Genie Jackpots, so some readers will already be well aware what this is. However, some wont and it is a good idea to understand feature drop before you start hitting that button every time you get a little bored.

Extra Chilli Megaways™ slot by Big Time Gaming is the natural successor to Bonanza slot. The mechanic is exactly the same although there is one major addition to the Megaways™ idea here as we’ll see. All you need to do is imagine Bonanza but with the diamond and gems on the reels replaced with chilli pepper’s of various colours, the purple being the equivalent of the diamond on Bonanza and the rest the same colour. Oh, and the scrolling reel of 4 symbols which contains any Wilds now appears underneath the centre four reels as opposed to above.

Extra Chilli has 6 reels with up to 7 rows on each. Instead of Bonanza’s frantic banjo player, you have equally frantic Mexican-style music as you spin interjected with the odd yee-hah! There are 324 to 117,649 ways to with symbols appearing both singly and stacked and any wins will disappear from the reels to be replaced by cascading icons from above. Your top 6-of-a-kind symbol is the purple chilli, paying 50x your stake and along with different colour chilli’s there are card symbols Ace through 9, making up the lower pays. A Fireworks Wild will substitute for all symbols except the Gold Cooking Pot scatters and those Wilds can only appear on the scrolling reel below as mentioned earlier.

You need 3+ Gold scatters anywhere, spelling out the word H-O-T, then you will be awarded 8 free spins. You may trigger with up to 7 scatters in which case 24 spins will be awarded and as before with Bonanza there are retriggers for 3 or 4 scatters only appearing on the scrolling reel. In this case you will get 4 or 8 extra games. Every winning action will increase the multiplier in play by 1x and it’s unlimited.

The new addition to Extra Chilli is the feature drop. This is a meter that starts at 50x bet and randomly gold coins can appear on the grid to reduce the price from 0.1 to 1x bet. If you get this down to zero you automatically trigger a bonus. If not, you can use the first ever Feature Purchase on a BTG slot for 50x your bet. If you do, the reels spin and at least 3 scatters appear. This gives you 8 spins which you can gamble on a 50-50 wheel for 12. The next 3 gambles are for 16, 20 and maximum 24 spins, all on 60-40 wheels. This means you have approximately a 9.5/1 chance of gambling 8 spins to 24.

Be warned! If you on the first gamble you lose the whole feature, on the second too. Once you’ve reached 16 spins you get 8 if you lose, reach 20 and you get 12 if you lose.

Extra Chilli Megaways™ slot is essentially the same as Bonanza but the feature is twice as frequent and pays half as much on average. Perhaps the feature purchase idea was in response to the hellishly low natural trigger frequency of Bonanza slot as 1/460 spins, but the gamble is very risky and the 8 spins initially awarded won’t go a long way so there is huge temptation to take expensive chances. It’s a very decent game with a 96.2% RTP but I haven’t seen enough here to remove my loyalty from its predecessor. 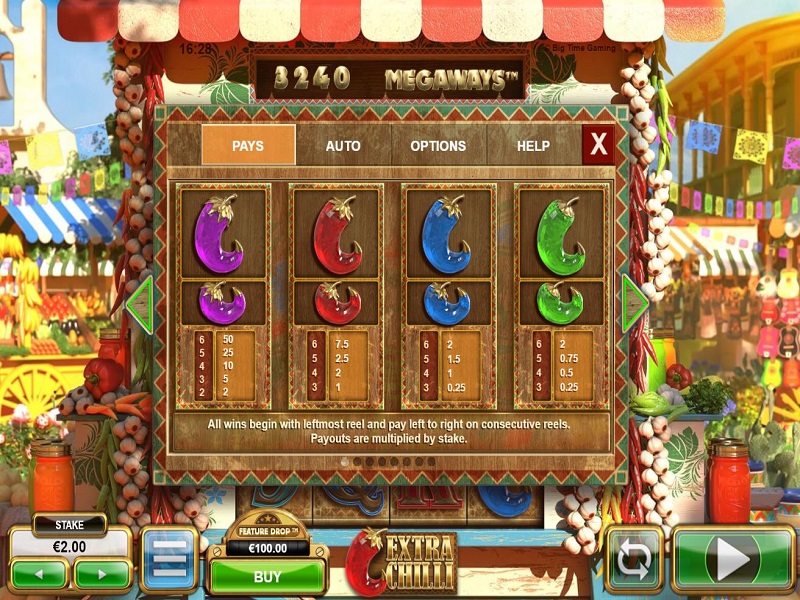 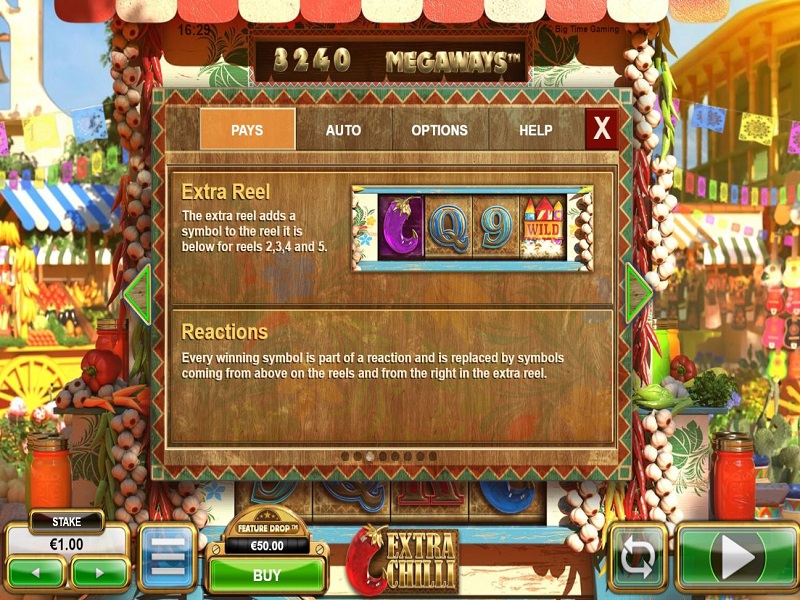 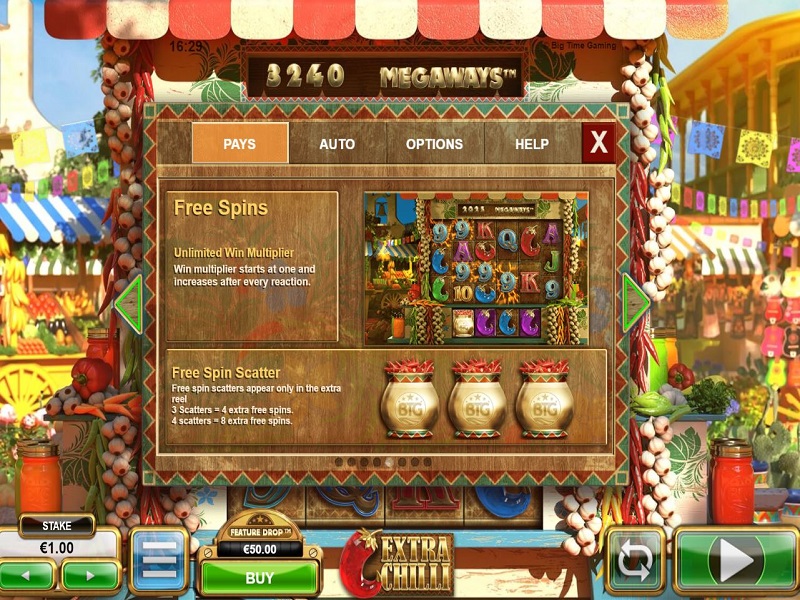 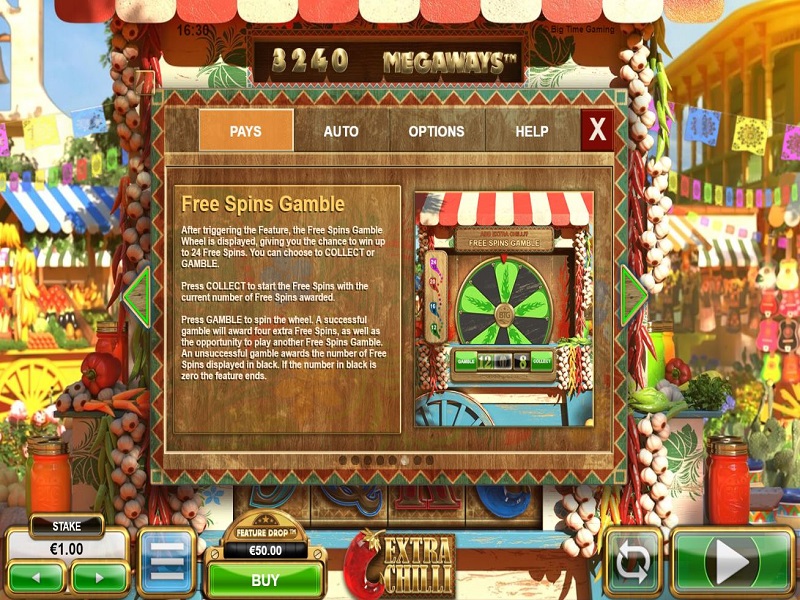 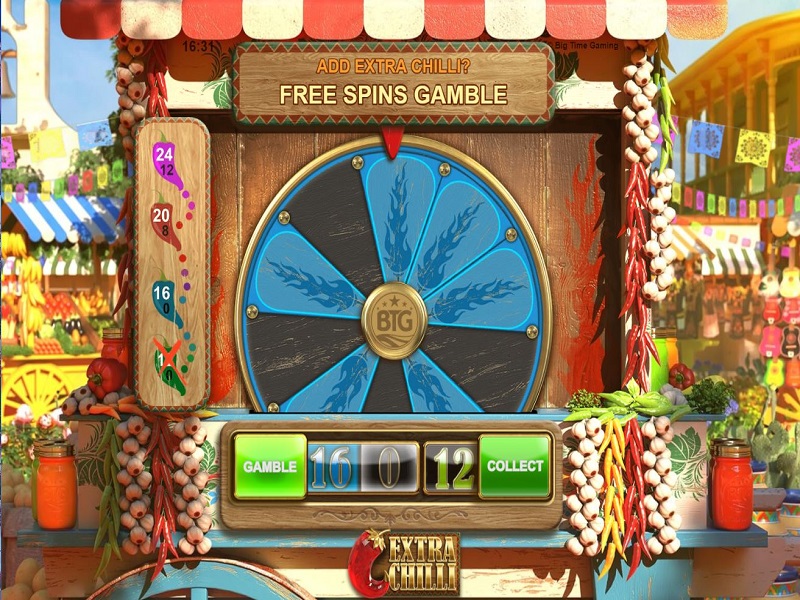 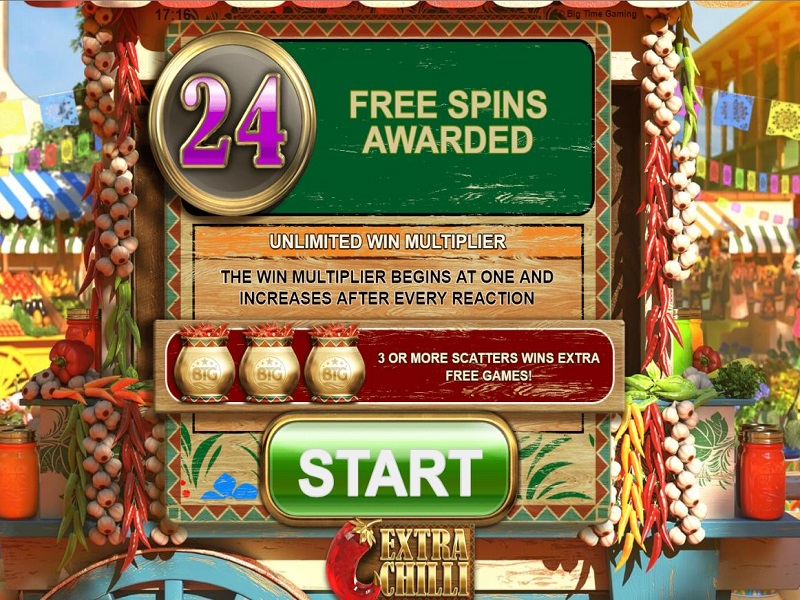 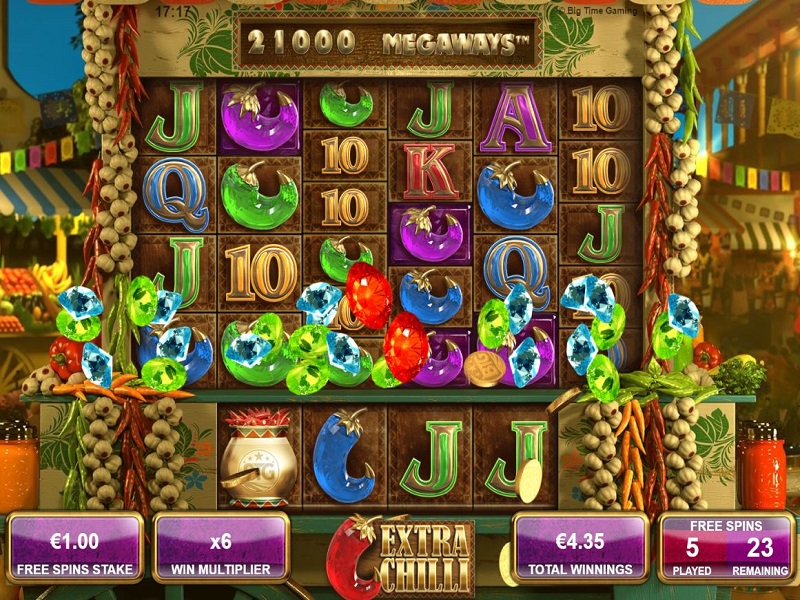 Big Time Gaming (BTG) continue to develop innovative and exciting online casino gaming experiences. The Megaways™ slot game format stands out among other online slots, giving players tthe chance of triggering huge wins on each and every spin. Extra Chilli is not a unique format, as we have seen it before with Bonanza, but that doesn’t mean that it hasn’t developed its own separate following. A note of caution to any player taking on Extra Chilli for the first time – you should set yourself a playing budget before you take on this volatile slot. Extra Chilli from Big Time Gaming offers some great potential winning opportunities, but it can also leave your bankroll empty if you don’t gamble responsibly.

The overall presentation of Extra Chilli is fairly typical of a BTG game. The action takes place in a lively, bustling Mexican market place with lots of hot chilli pepper’s and other food symbols. The reels of this slot are  placed within one of the market stalls with hanging fruit and vegetables from either side. The symbols are mainly made up of coloured chilli’s along with your standard A – 9 card icons. The actual animations are pretty good as symbols whizz up and down the 6 reels in quick succession and then explode rather dramatically when part of a win line. The Megaways™ engine will always keep things interesting with reels changing on each and every spin..

The gameplay is accompanied by tradition Mexican music, which is in the style of a Mariachi band belting out a tune continuously. This part for me is possibly the most irritating bit of the game and I will quite often turn sounds off on which ever device I am playing this game on. That being said, I am sure some players will really enjoy the upbeat sounds mixed in with some exploding chilli peppers, making for a fun-packed and exciting gaming experience.