Genie Jackpots Megaways™ slot is has been developed by Blueprint Gaming, under license from Big Time Gaming. It offers a staggering 15,625 ways to win with each and every spin. The video slot provides slots fans with lots of potential with multiple wilds, re-spins, free spins features and some guaranteed wins. Genie Jackpots is an exciting game that it will keep you entertained, as it joins other Megaways™ titles such as Buffalo Rising and Primal.

This slot game is actually a remake of the original Genie Jackpots slot game, it just comes with the exciting Megaways™ game engine. This suddenly opens up the winning potential of this game, without detracting from the experience. The theme is fairly obvious, with the classic fantasy of ‘Genie’s in bottles’ granting numerous wishes to however rubs the lamp. Almost the entirety of the game is displayed in 2D, the exception being the genie, which is in a 3D format.

Blueprint Gaming Megaways™ slot Genie Jackpots, like many other games is offered in free play. This allows you to get a good grasp of this video slot before you play for real money. It certainly is worth considering playing Genie Jackpots for free to get your head round the large number of bonus features that are present in this game.

Despite the name, there is not a progressive jackpot with this particular online slot. The game does however pay out quite frequently, which means it is not as volatile as some the other Megaways™ slots such as Extra Chilli or Dragon Born.

Genie Jackpots Megaways™ slot is from developer Blueprint Gaming and uses Big Time Gaming’s Megaways™ license. Prior to this came Diamond Mine and Irish Riches which have the Bonanza format but this Middle Eastern-themed game was originally Merkur’s and called Genie Jackpots. Now converted into a Megaways™ game it retains the idea of having multiple features unlike most others, which may or may not make it more fun for both us and our money.

The Megaways™ here are the lowest in number of all Megaways™ games as the maximum is for all 6 reels to have just 5 rows, giving 15,625 ways fully extended and a minimum of 64 ways when all reels display the lowest 2 rows. Our Genie Jackpot symbol pays 25x bet for a full way of 6-of-a-kind, then the Gold Chests at 5x, Hat or Swords 2.5x along with 6 card values paying 1x or 0.5x for six. All symbols appear stacked in variable numbers with Wilds being mainly single and your Bonus scatters appear on every reel.

A genie’s lamp under reel 6 may shake into life on occasion and if the Genie himself actually emerges you will be granted one of four modifiers for that particular spin.

Genie Wilds – Wilds are placed on the grid and could well fill the maximum 5 rows of any reel too.
Bonus Megaways™ – the grid displays the maximum 15,625 ways and extra scatters are placed on them for a high chance of a feature trigger.
Wild Megaways™ – randomly Wilds appear over any amount of positions on the grid.
Genie Win Spin – the Genie spreads mystery symbols or Wilds and ensures a win.

Landing 3 or more green bonus scatters triggers a pick screen with 4 lamps. This is because you can get 4 differing free spins games which the slot decides for you, as follows:-

Multiplying Wilds – any Wilds get a random 2 or 3x multiplier added like you see on the Buffalo style slots. Two scatters means more spins.

Unlimited Multiplier – cue the increasing multiplier on each free spin regardless of winning, like the old classic Cleopatra 2 did. Again, 2 scatters awards extra spins.

Locking Wilds – your spins have the middle 4 reels fixed at the full 5 rows in height. Any Wilds on those reels become sticky. Fill a reel to earn 1, 2 or 3 extra spins.

Genie Streak Spins – any win starts a respin streak. This ends when no more winning symbols are added to the win in view. If a whole reel is filled again 1-3 extra spins are granted.

Genie Jackpots Megaways™ slot is hugely popular and possibly the best Blueprint slot released if player feedback is considered. There’s big win potential in the base game along with frequent Genie’s Lamp random features too. The graphics, animations and sounds are excellent and we enjoy a reasonable 95.75% RTP. Any one of the 4 bonus rounds could be exciting and award potentially huge wins capped at 10,000x bet, but like most you’ll eventually decide which one is your favourite. You can buy the feature for 100x bet if you’re that kind of player, but all good things come to those who wait! 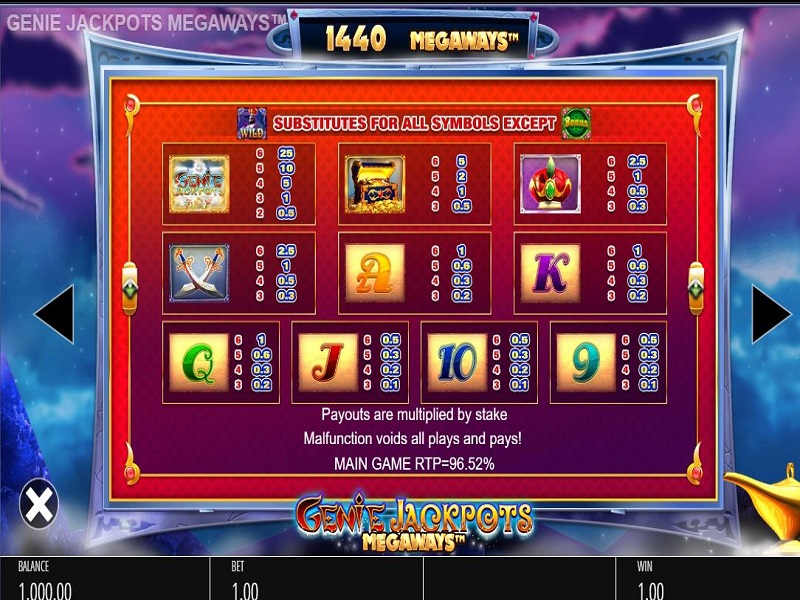 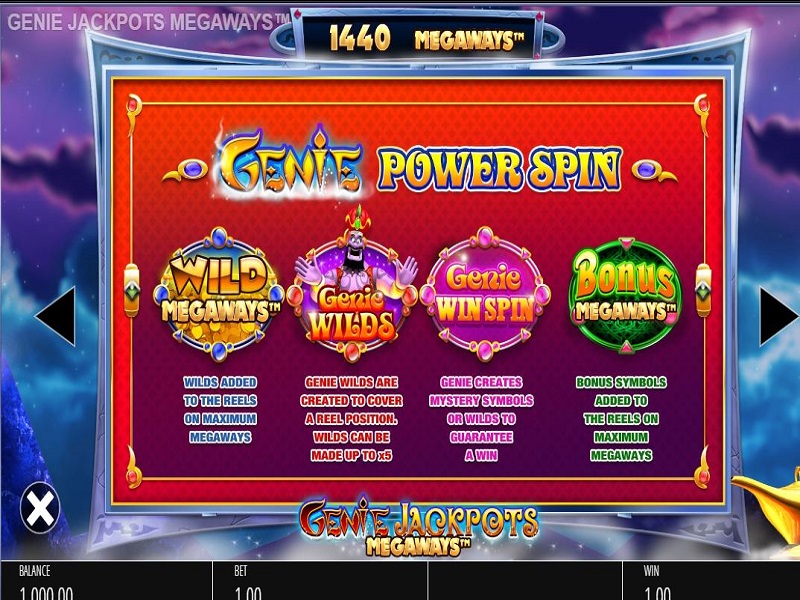 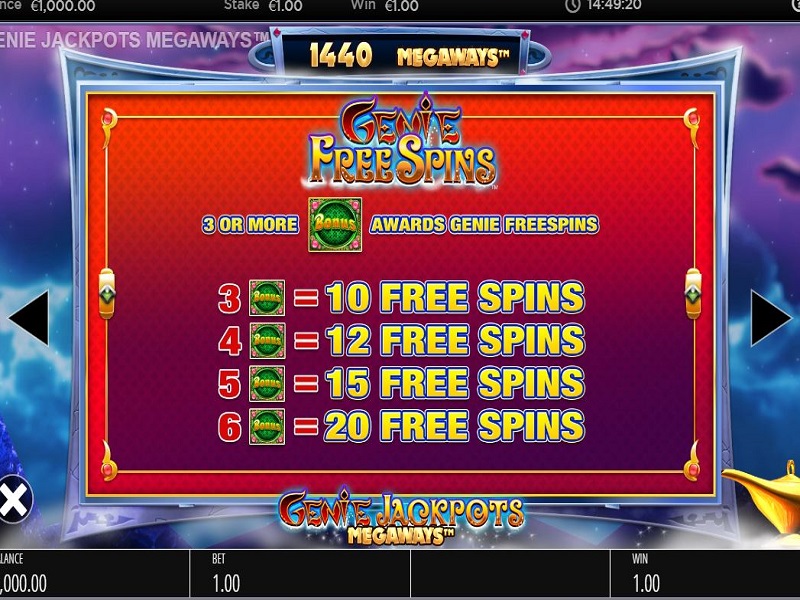 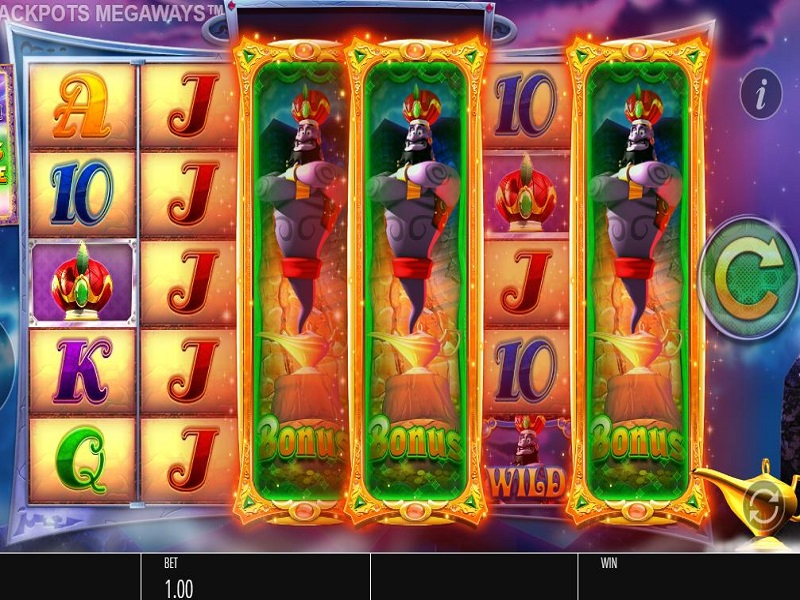 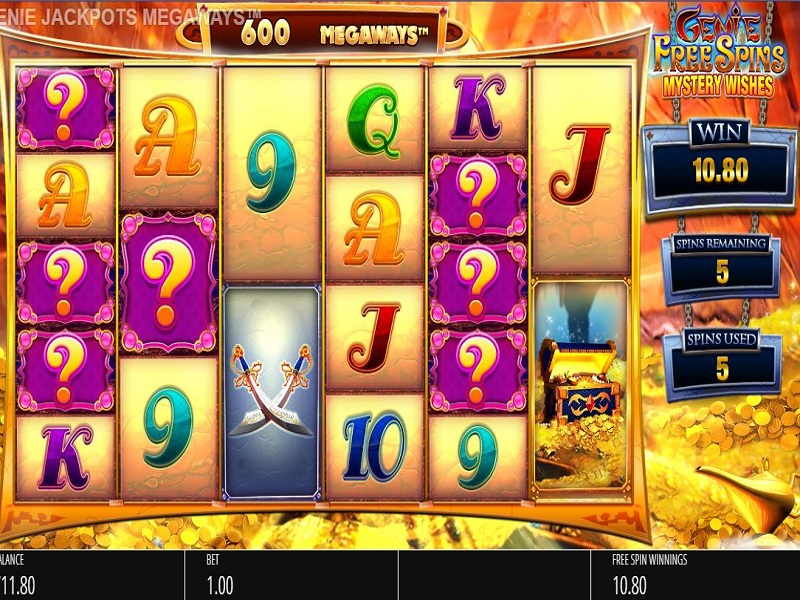 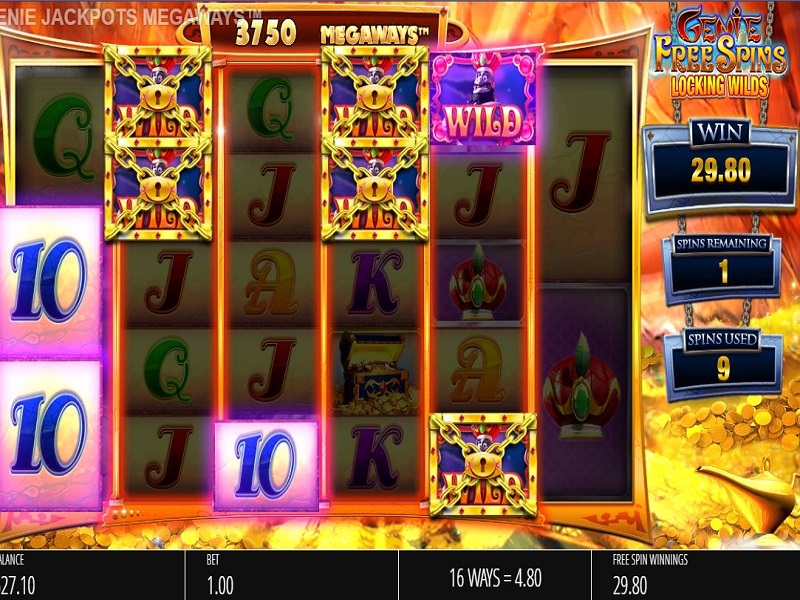 The overall design of Genie Jackpots Megaways™ slot is very much bold and loud. The graphics are mainly bright colours, with an accompanying soundtrack of classical Arabian rhythms. The Megaways™ game engine offers up plenty of chances to win, as do the base game modifiers, which keep things ticking along nicely. The game offers everything a Megaways™ video slot fan could wish for. It’s a fun game for serious players, who like the opportunity to bag a big win. There are some aspects of this title that are a little bit disappointing, but in the main it is pretty enjoyable slot. Genie Jackpots Megaways™ slot delivers a nice mix of anticipation and potential returns.

Genie Jackpots is very similar to other Megaways™ slot games and it certainly doesn’t brake the mold of what is on offer from titles offering thousands of ways to win. It does has some Blueprint Gaming key elements included. It looks very much like a throwback to slots designed in the early 2000’s, slightly clunky and old fashioned by modern day standards. This is not necessarily a bad thing – it you could say gives the game a certain charm. Arguably the sounds also fall into the category of being a little bit obvious and unoriginal. I think you are more likely to play this game for how it plays, rather than how it looks.