Holy Diver Megaways™ slot presents a truely medieval theme, offering us Longswords, Castles, Royal Crests and much much more. The game is packed full of various symbols, which don’t necessarily convey the theme, but they are very identifiable with developer Big Time Gaming. It joins a lineup of very impressive games that carry the Megaways™ game engine, such as Dragon Born, Starquest and Who Want’s To Be A Millionaire slot.

The Holy Diver slot offers a staggering 586,971 ways to win, alongside a great range of bonus features. This includes extra wilds, multipliers and free games as well as an assortment of other prizes. That said, it is also a volatile game and will likely leave you pulling your hair out at times as you wonder where all the winning opportunities have gone. It can be very streaky and leaves many wondering where their balance has disappeared to. However, for some, there is an opportunity to win big here and that is what draws lots of people in. 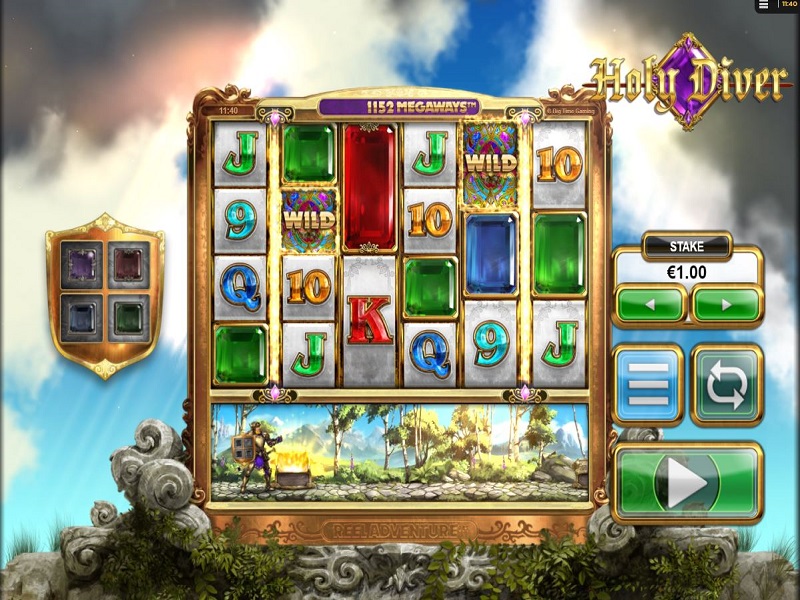 The online slot Holy Diver has been developed by Big Time Gaming and like many of their Megaways™ titles, it is action-packed and full of features, bonuses and rewards. That being said, sometimes it can take some time (and money) to activate such rewards. Playing Holy Diver slot in free play is the only real way to get an understanding this slot without spending any money. You can’t get enough information or experience from viewing the paytable of watching videos of the game online. It makes so much more sense to try it for free online in a demo game before you deposit and play for real.

Holy Diver slot stands out from the other Megaways™ slots first made by Big Time Gaming such as Starquest or Extra Chilli with an exciting and different game mechanic. Holy Diver gets its name from a song by former Black Sabbath vocalist Ronnie James Dio who passed away sadly in May 2010. You can hear the Holy Diver track by Dio when you play the free games but for now we see a quasi-medieval theme and background and most noticeably a knight in armour under the reels who has a very important role here.

Our 6 reels give the same amount of ways as Bonanza with the reels showing any amount of row each from 2 to 7 therefore 64 to 117,649 ways are possible. Unlike that game we don’t see super stacked symbols though although more than 1 of a type can appear on one reel if there are enough rows in play.

The highest symbol pay is 15x bet for 6-of-a-kind Purple Gems followed by Red 5x, Blue 4x and Green 3x. There are as usual six card values awarding 1.5 down to 0.5x bet for a full way of 6 band you will see there aren’t Wilds or scatters on the grid and you don’t get cascades after any wins to replace symbols. This is because the Knight does all the dirty work on Holy Diver as he walks along underneath the grid!

There’s a shield on the left resembling the one the Knight carries and at least once every 5 spins he will smash a Chest of Fortune to reveal one of 4 possible rewards for you:

Gems – anything from one to all four of the different coloured gems can appear from the Chest and they are placed in the Shield to the left and also you’ll see the Knight’s shield show them. You need all 4 to trigger the free games.

Sword Bonus – awards Wild Reels of which you can get 1 to 3 anywhere on the centre 4 reels with a 1 to 7x randomly allocated to up to a 343x multiplier is possible.

Fireball Bonus – a single Wild tile placed on 1 to all 4 centre reels.

Standard Symbol Bonus – one of the card values is selected to transform to a Wild wherever it appears on the centre 4 reels.

You are guaranteed the Knight opens a Chest every 5 spins but sometimes he runs and covers more distance so you can get them even on consecutive spins too.

Soon your Knight will collect the full set of 4 gems necessary to fill his shield and trigger the 10 free spins. Now during these any gems on the middle 4 reels will turn Wild. You can choose to continue and forfeit these spins to fill the shield a second time, and now your spins will give 2x Wilds for those gems. You can even forfeit those too and ascend to the third and final level where the Wilds are 3x.

During these spins the Knight still has monks to smash instead of chests which may reveal a diamond for an extra spin each, the 5th. diamond giving you an 8-spin retrigger if you are lucky enough to get that many diamonds. When you do get a retrigger of 8-spins you activate more ways on the reels too for the remainder to have a maximum of 586,971 ways in play! This is done through cascading more symbols into view and this means more than one Wild gem can appear per reel as well, meaning some huge win potential.

Holy Diver in my view is the best BTG Megaways™ since Bonanza and the beauty is that you can change your volatility by choosing which bonus level to take your spins in. The RTP is therefore in a range of 96.39-96.54%. The graphics, music and animations are very good, especially if you like Dio. The real selling point for me is the Chests where something is guaranteed in play at least once every 5 spins and sometimes this can be substantial too. Full marks for imagination here Big Time Gaming! 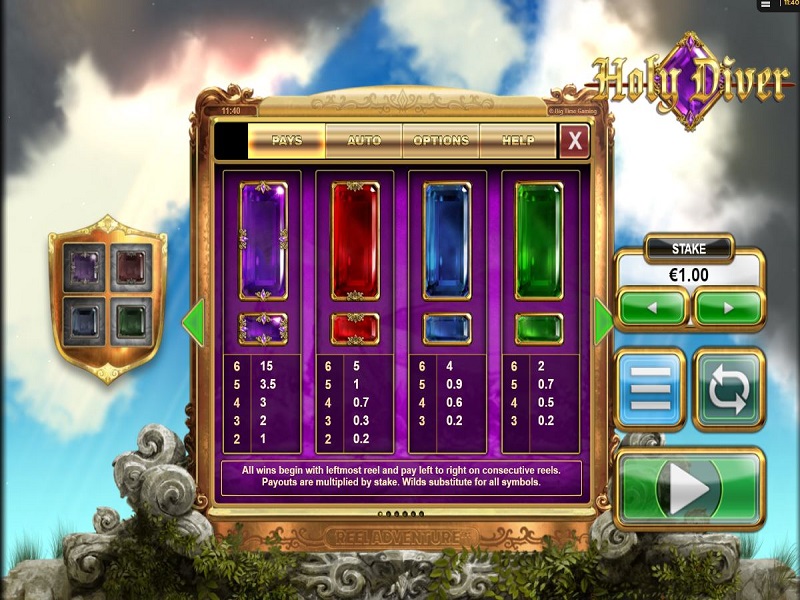 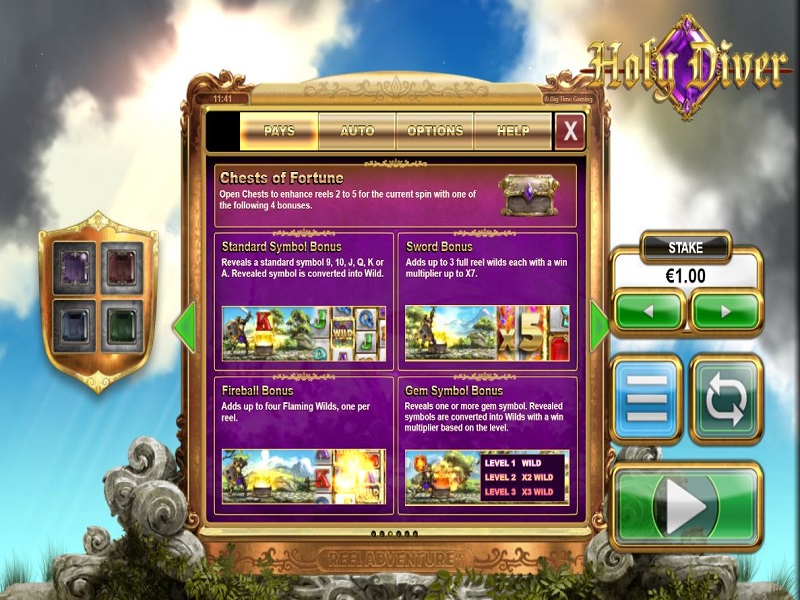 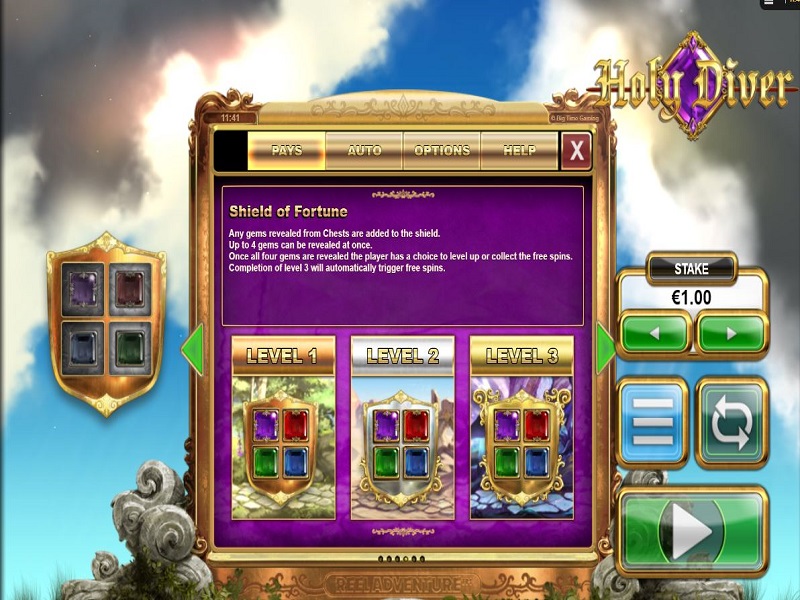 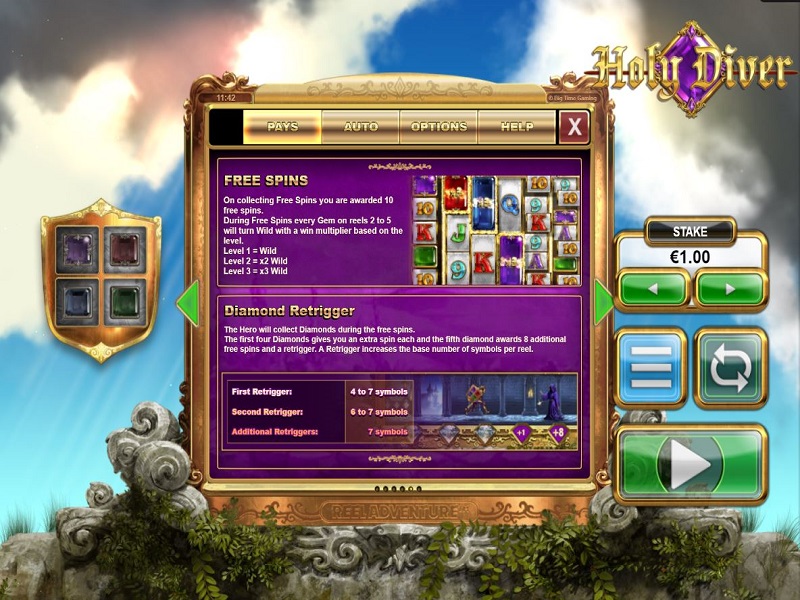 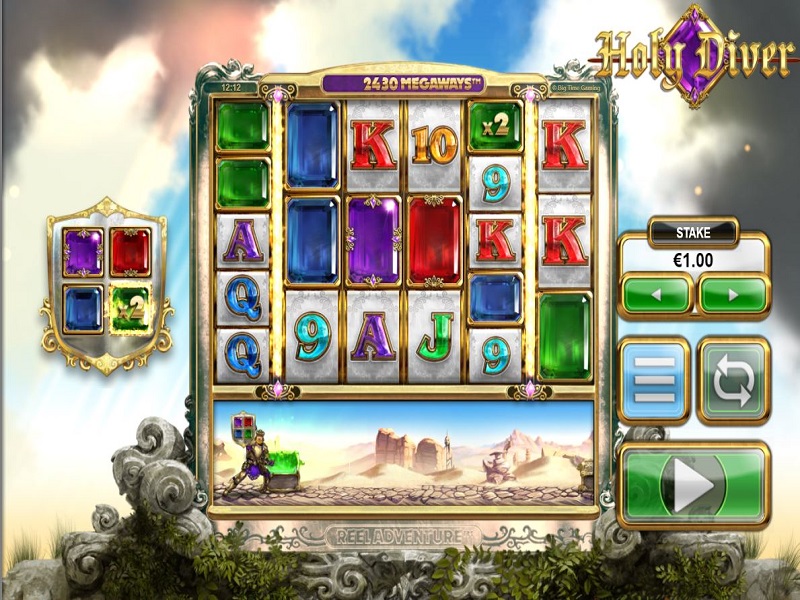 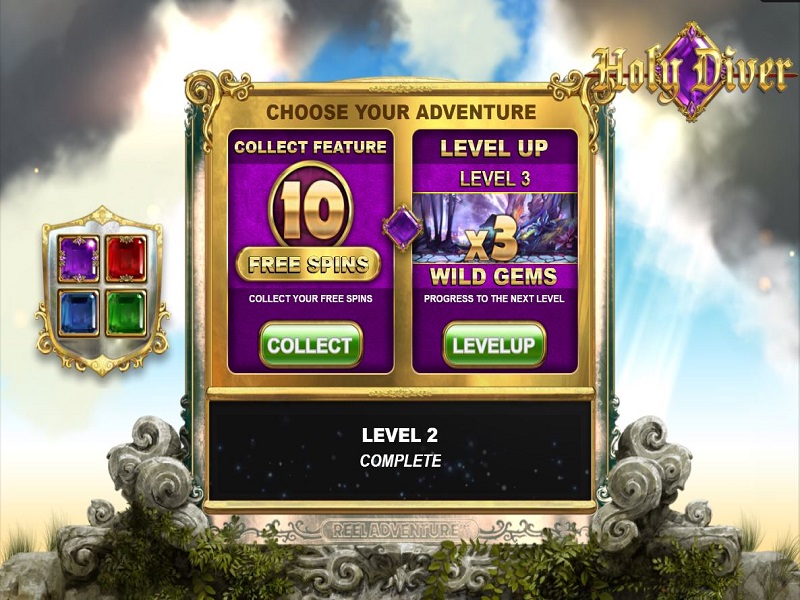 Holy Diver’s name comes from a music track of the same name from ex Black Sabbath vocalist Ronnie James Dio. This is what is played during the bonus feature, which those familiar with the song will instantly recognise. It is an interesting concept having such an iconic track playing along whilst the knight makes his way along the path, revealing features as he goes. There is a lot of interaction in this game, like is common with Big Time Gaming slots.

So what makes Holy Diver stand out from the crowd of Megaways™ slots? It’s maybe that some of the faults in others makes Holy Diver a pretty good game. Whether its the way you can get a bit trapped on the WWTBAM slot, the sketchy gamble wheel on the slot Extra Chilli or the lack of excitement in Starquest, that Holy Diver is potentially going to prove to be one of the best Big Time Gaming slot since the uber-successful Bonanza. The jury is still out, as what will prove its success is players constantly playing it – something we have seen with other Megaways™ slots such as Bonanza and White Rabbit.