Blueprint Gaming’s Irish Riches Megaways™ online slot, introduces the most popular game mechanic to the Emerald Isle. This video slot offers a staggering 117,649 ways to win, offering lots of winning potential. This slot title presents a bright and breezy theme based on Irish Luck – something we have seen countless times before from other developers, eg. Barcrest’s Rainbow Riches. If you strike it lucky then you might just get a chance to play for the progressive jackpot with this game. Irish Riches Megaways™ was developed by Blueprint Gaming, but the game engine is licensed from Big Time Gaming, who have become famous as a wagering game developer through this powerful format of video slot. It led to some of the most popular games of the modern era, including the mining-themed Bonanza slot or the fantasy-inspired White Rabbit. 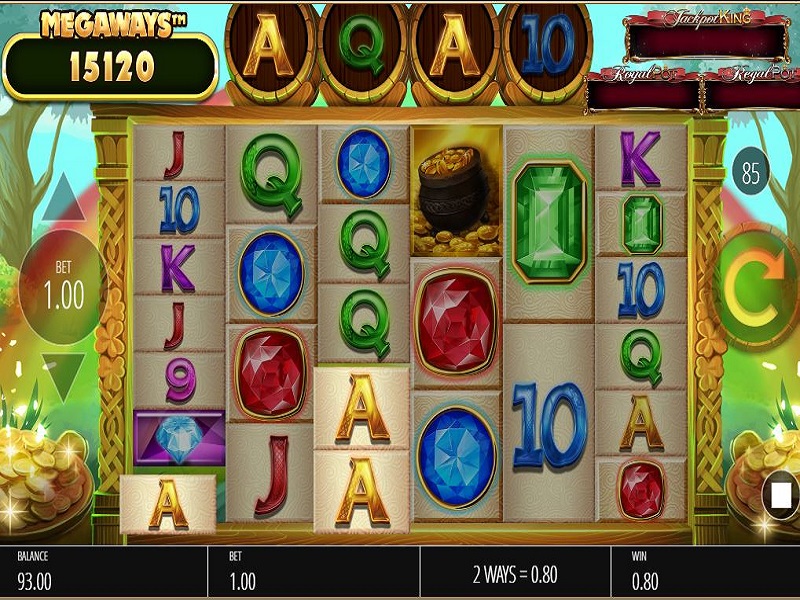 Irish Riches Megaways™ slot is like many other games of this type, in that it is best to try it out for free before you deposit and play for real. Why do this? Well, like many of the other Megaways™ slots, there are a ton of features in Irish Riches which all offer a variety of rewards. Getting your head round these before you start playing for real can benefit you in the long run. This game is available to play for free, so why not take advantage of this. Like all the other Blueprint Gaming slot titles, Irish Riches Megaways™ is a browser-based video slot which doesn’t require you to download the game.

Irish Riches Megaways™ slot is Blueprint’s second version of Big Time Gaming’s Bonanza. Diamond Mine was their first game made under license from BTG and Irish Riches is pretty similar it must be said. The difference here is that we get Celtic music instead of the frantic yee-hah stuff our ears were battered with on Diamond Mine and obviously the main picture symbols differ. Riches are hard to get from these kind of slots, Irish or not.

The game has six variable-row reels as it usual with this Megaways™ format, with the middle four reels having a scroll of 4 tiles above them and that is the only place you’ll see any Wilds too. You get the mystery stacks here too that Blueprint first added to Diamond Mine and here we have them in the guise of rainbows which all reveal the same game symbol, aside from scatters.

As with Bonanza and Extra Chilli there are between 324 and 117,649 ways possible on any spin with stacked icons making an appearance and therefore offering the possibility of some big hits. Gold Bags pay 50x bet as the best 6-of-a-kind and we see this descend down to the lowest card value 9 at 0.8x bet. We need 4 or more Diamond scatters to trigger the bonus.

Land 4 or more Diamonds and trigger the 12 free games which offer an increasing multiplier for every winning cascade action. Each extra scatter up to a maximum of 8 earns you 5 extra spins so you could theoretically start with as many as 32 spins. You can also earn 5 or 10 extra spins if 3 or 4 scatters respectively appear in the scrolling reel above the grid.

This game has had the Blueprint Jackpot King network progressive added and can be randomly triggered on any spin, where the reels spin with either blanks or Jackpot Crowns to award cash multipliers and hopefully the Jackpot Wheel.

Irish Riches Megaways slot loses a small part of the RTP because it is in the Blueprint Jackpot King network but not enough to make it much different from Bonanza’s 96% – here we get 95.93%. It’s pretty much a Diamond Mine clone and as Irish Riches came after that game, it has struggled to make much impression on players. It is what it is, a simple alternative with different graphics and therefore unremarkable. Me? I still get drawn to the original Bonanza rather than its Irish cousin. 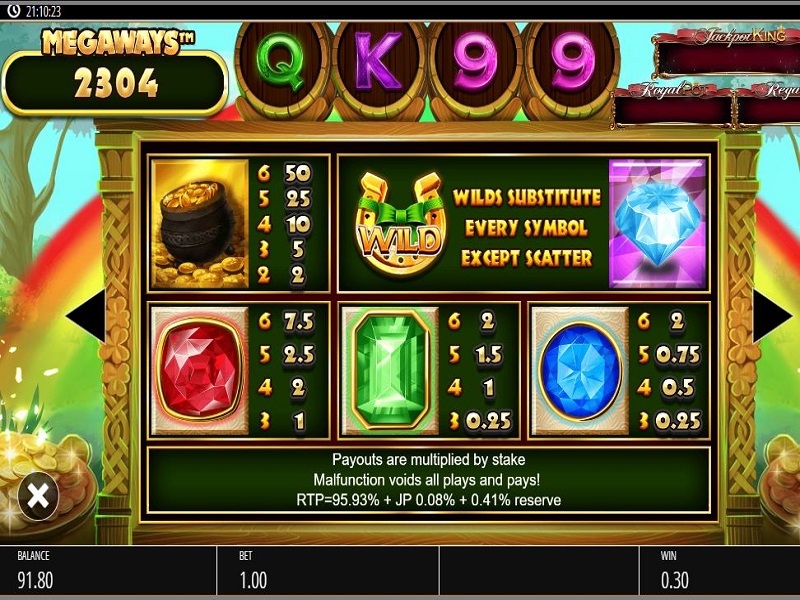 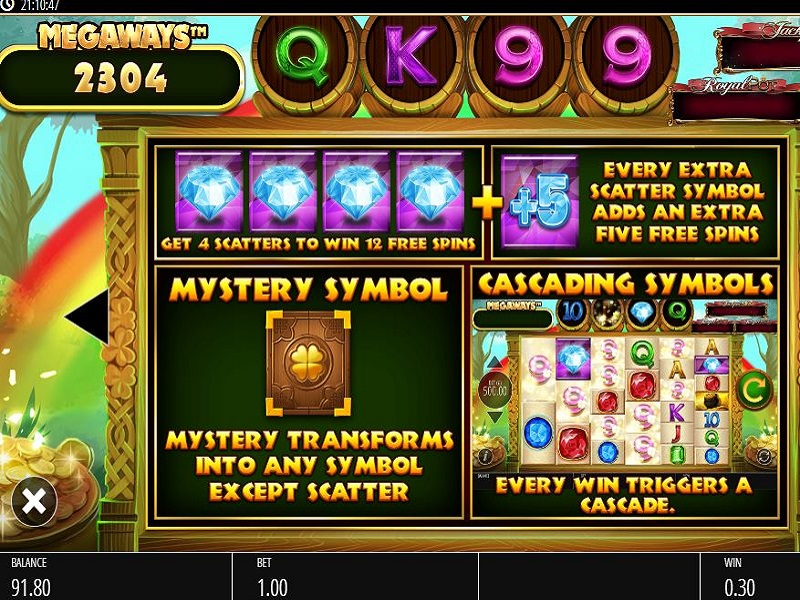 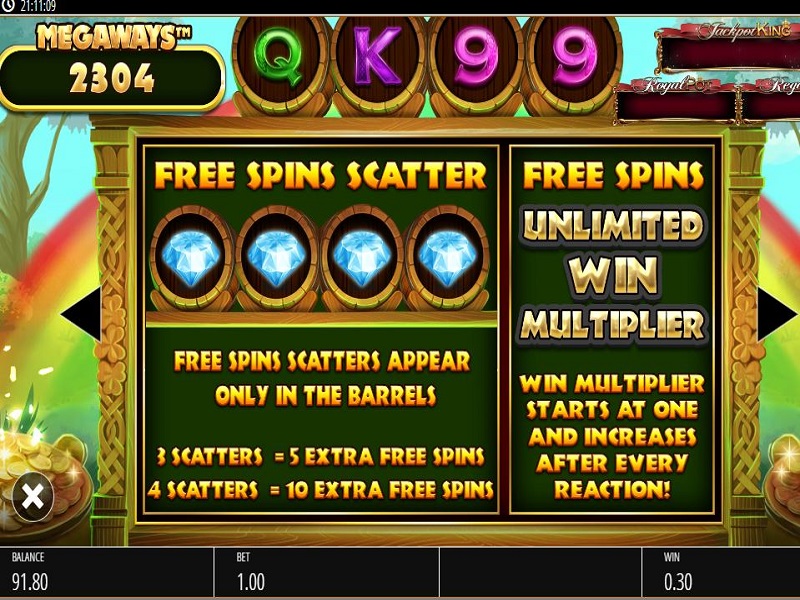 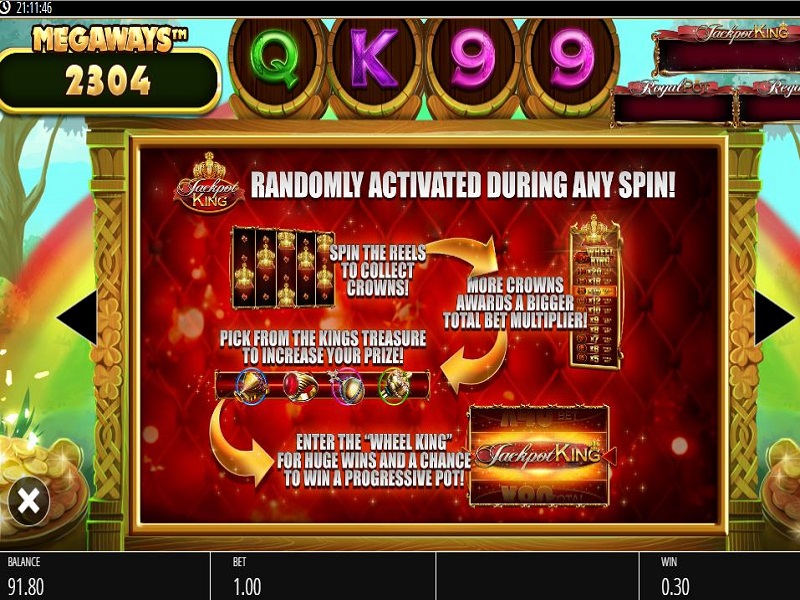 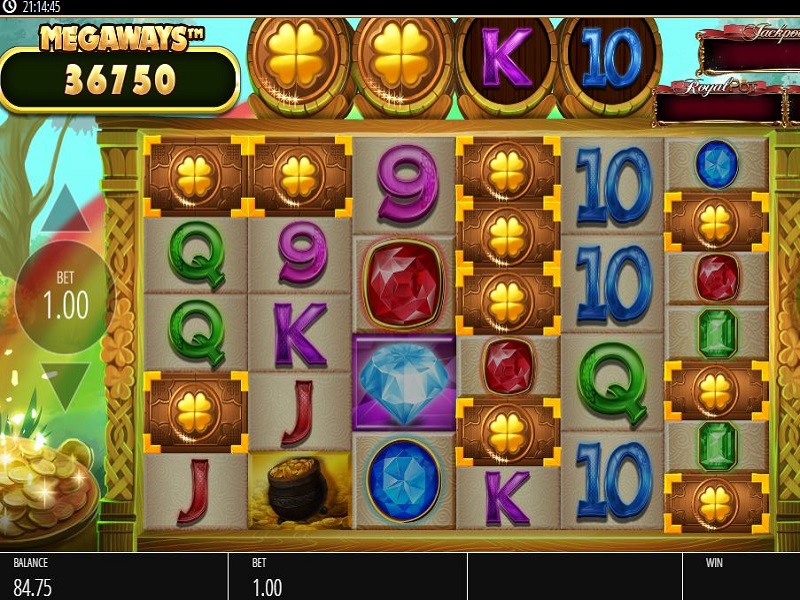 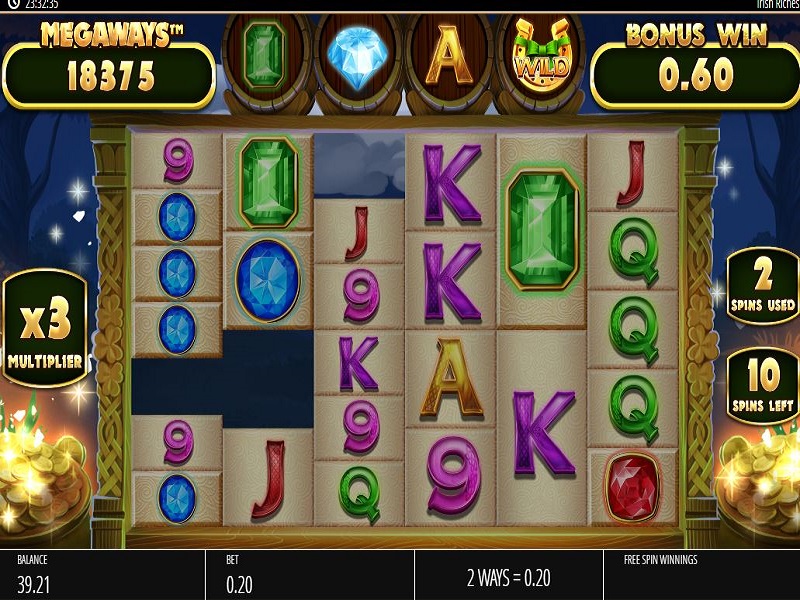 Irish-themed slots are very very common and it is almost the default theme to turn to when developers are struggling for new ideas. It would be fair to say that Blueprint are playing it fairly safe with their first Megaways™ game, which is understandable. That being said, I would have liked to have seen something a bit more adventurous, especially seeings as the Megaways™ game engine should sell itself. Irish Riches will possibly appeal to most Megaways™ slots fans, but I can’t get away from the fact that it is virtually a copy of Diamond Mine. The familiar game set up of free spins and multipliers can all be found here, but there is certainly nothing new. Like with all slots of this nature, the chances of winning are big, however you can expect hundreds of dead spins. It is wise to play this game responsibly, as these Irish characters aren’t always as friendly as they look.

To have a chance of scooping the Irish Riches Megaways slot progressive jackpot you need to see 5 Jackpot King symbols. Those that have played Blueprint slots before then you’ll probably be aware of the Jackpot King progressive jackpot network which this game is linked into. Once the 5 symbols have fallen into place (should they do so), then you need to spin those reels and seek to collect a minimum of 15 Crown symbols which will transport you over to the Wheel King where you will get a chance to play for the big jackpot prize. If you get this far, then best of luck to you!