Machina Megaways™ slot is Relax Gaming’s first title to use Big Time Gaming’s popular Megaways™ game engine. What is interesting is that Relax have chosen to be brave, choosing a unique theme to wrap onto this tried and tested slot format. There are growing number of developers who now license Big Time Gaming’s Megaways™ mechanic, as we are also seeing with developers such as Kalamba and Blueprint. The Machina Megaways™ slot is set in a futuristic dystopian city, which is well designed and animated. The game includes robotic sounds and a looping track very fitting of the theme.

Despite a very original theme, Machina Megaways™ slot still includes all the bonus elements and features that we would expect from a Megaways™ title . The transforming symbol feature especially brings a new twist and can offer some new winning possibilities on the reels. There are three jackpots within the game, adding an extra dimension of prizes up for grabs to any player entering this sci-fi world. 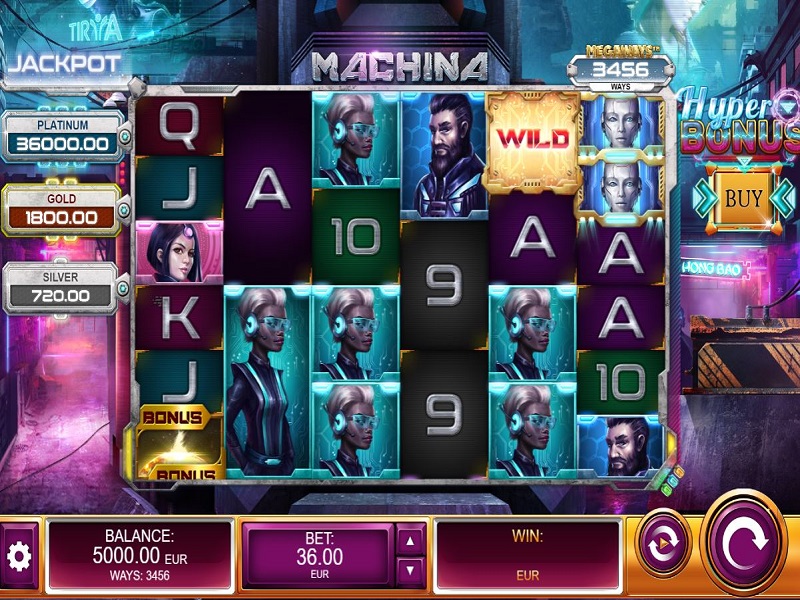 Machina Megaways is Kalamba’s first game creation using the Big Time Gaming licence. You get a bonus very different to that which you’ll see on Diamond Mine, White Rabbit or Bonanza so it’s certainly unique as it stands. The theme is a sci-fi one with a futuristic design featuring urban warriors and robots with matching music and a grim looking city behind the grid. The prospect for your money can be equally grim as you will find out shortly.

Unlike the Big Time Gaming megaways slots, our 6 reels here only go to a maximum of 6 rows high therefore offer us a maximum of 46656 ways to win. It is also necessary to pay 60 coins per spin, unlike the minimum of 20 on the Blueprint and BTG Megaways slots. The top icon, the robot, only pays 200 coins or 3.33x bet for a full way of 6 and the other 3 character symbols 175 coins. You cannot see 6 Wilds as they only appear on the centre 4 reels. The rest are card values and are obviously even lower so surely we will find a way of overcoming those lamentable pays?

You need three or more Computer Chip scatters which award 10, 12, 15 or 18 free spins for 3,4,5 or 6 respectively. The enhancement here is a scaled character symbol elimination. There are four to eliminate by way of landing scatters to fill a meter which needs 4 for the first 2 and 5 for the last 2 of the four characters. Each time one is eliminated it transforms into the Robot on the reels and grants 2 extra spins. The idea is to convert them all so the final spins only have the Robot left aside from the card values.

There are internal jackpots of 20, 50 and 1000x bet on the left, silver up to platinum. These are awarded by getting 9 or more Robots in view on any free spin and you need 16 or more for the platinum one. The good thing is that when these Robots land they also pay as reel wins if you land 3 or more from the left on consecutive reels, as well as awarding the jackpots. You can win several jackpots in one bonus if you are fortunate.

To sum Machina slot up, it has a very different feature mechanism to other Megaways games and looks and sounds good. Other than that I reckon it to be a pretty poor slot from the perspective of big win potential and gameplay. Due to the free spins mechanic the outcomes pretty much reflect what you pay for each of them. So to triple your 202 Pounds or Euros price for buying 18 spins at minimum stake you’d need a feature paying 1011x bet or more. Trust me, that’s exceedingly rare. The main game RTP is 96.59% rising to 97.42% if only using the maximum feature buy. I would recommend you spend your Megaways money elsewhere as this is one dangerous Machina. 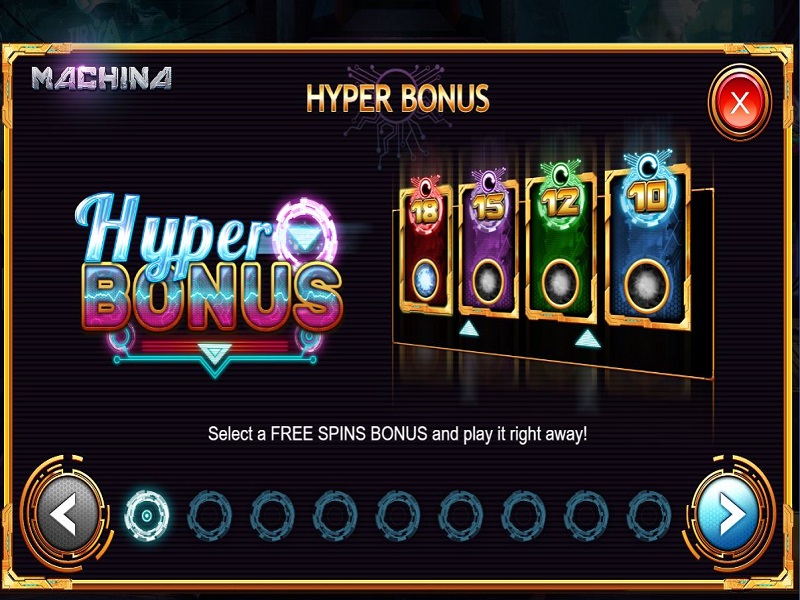 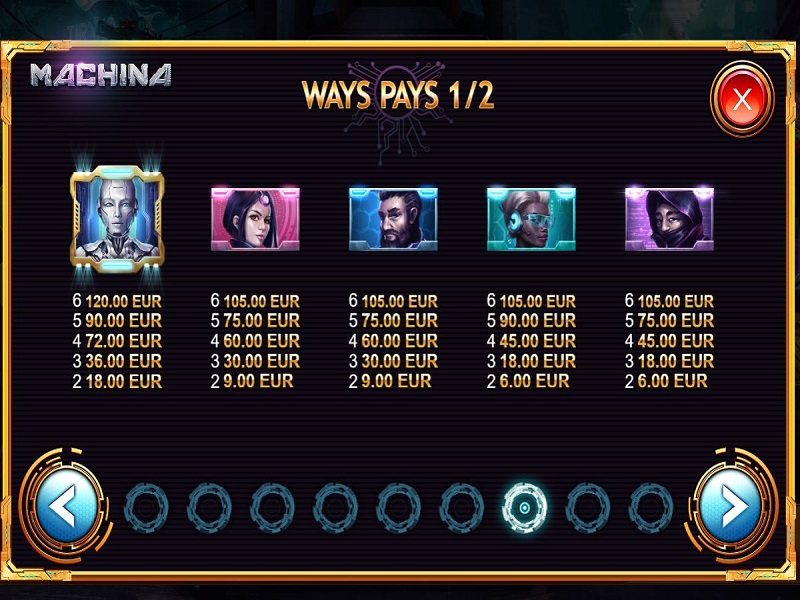 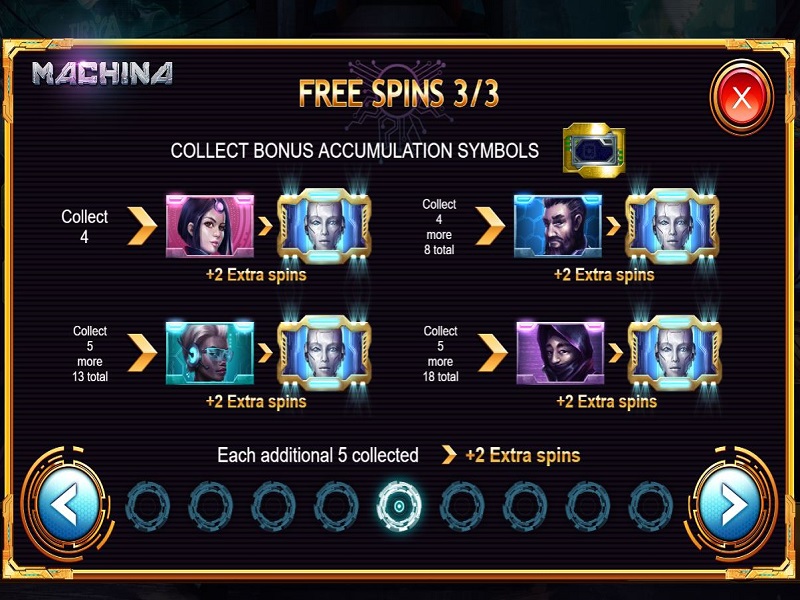 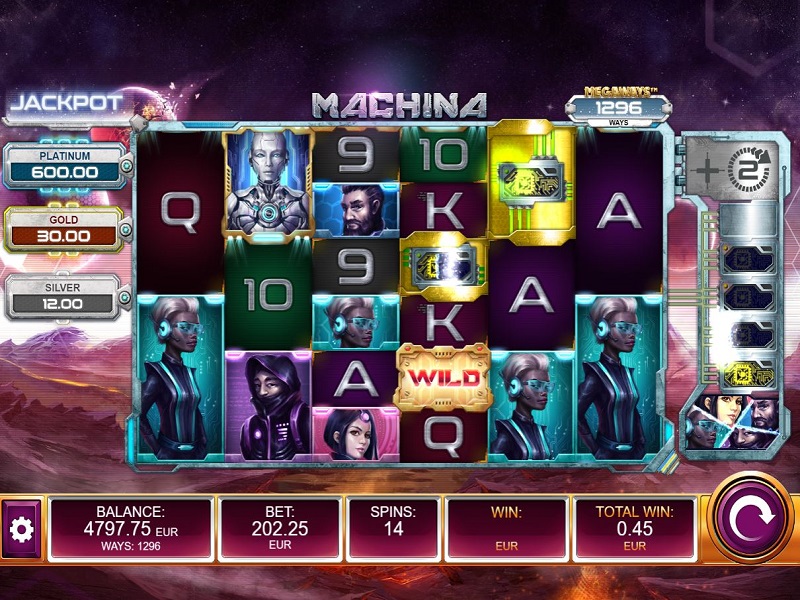 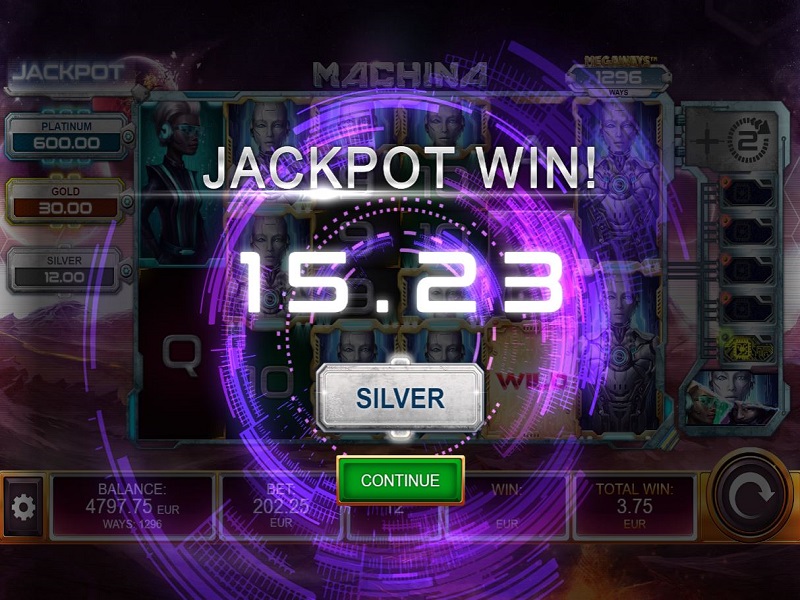 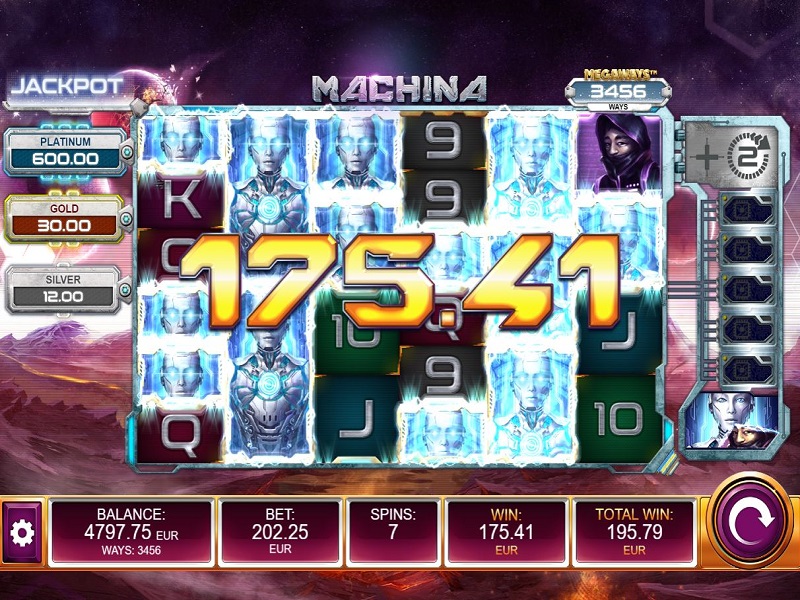 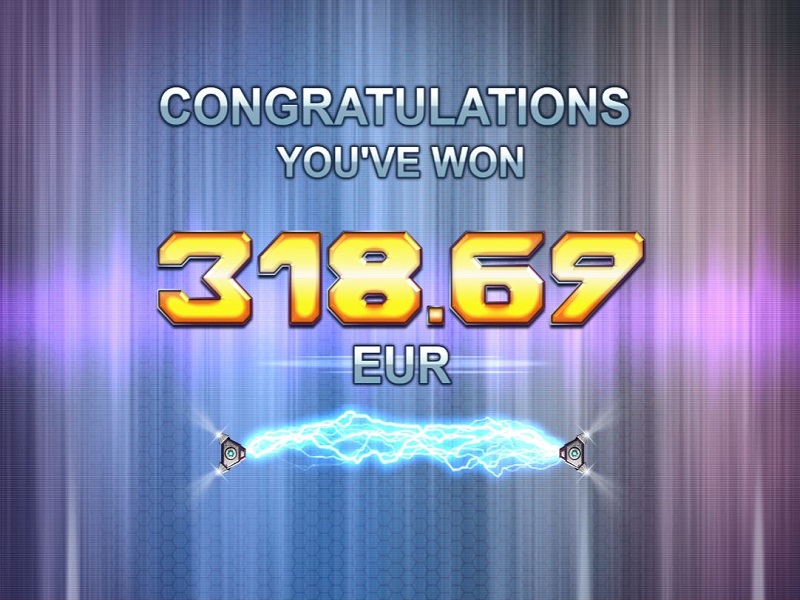 Machina Megaways™ slot is part of an interesting selection of titles that have come into view. There are few slots that compare to this unusual cyper-punk style-game. Yes, it contains the whole shooting match of slot staples, such as ten  picturessymbols, a standard bonus feautre and so on. However, then you get Big Time Gaming‘s Megaways game engine going on, adding a totally new dimension. Don’t be fooled into thinking that this is yet another Megaways licensed game like some of the Blueprint Games, ie Primal and Vikings Unleashed. Machina has its own special multiway thing going on, offering up 46,656 ways to win instead of the standard 117,649  ways seen on most other Megaways titles. The number of paylines in Machina Megaways slot is far beyond a typical multiway slot, and this seems to be going down just fine with players. Notwithstanding a sixth reel, adding more winning opportunities and larger potential wins.