Primal Megaways™ slot is a game by Blueprint Gaming and joins their growing range of games of this format. In this particular video slot you are taken back in time to an period when humans were starting to evolve,  fondly known as ‘cavemen’ in modern times. Primal uses the Megaways™ game engine, which is also used in other slots such as WWTBAM slot, Starquest and Vikings Unleashed, to name but a few.

It would be true to say that Megaways™ has given Blueprint Gaming a big boost in popularity. However, there is also an argument to say the Blueprint have also helped with the growth in popularity of Megaways™ slots, with their global reach. Blueprint Gaming have tended to focus on branded slots in recent times, with old-fashioned game mechanics and relying heavily on the characters in the game to draw players in. Having Megaways™ games in their portfolio has allowed them to attract new players and offer more exciting slots in their portfolio. 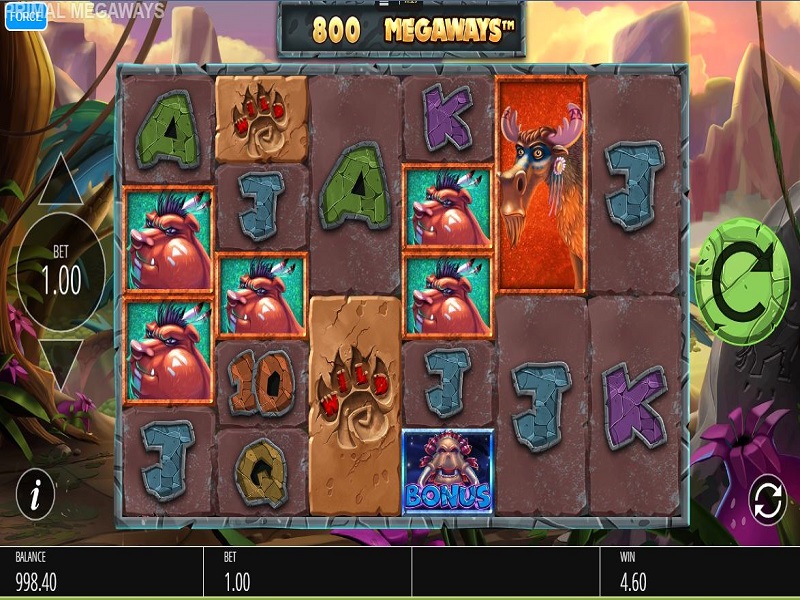 It is fair to say that Primal Megaways™ slot does carry a resemblance to another Megaways™ title – the wildlife-themed Buffalo Rising and other Blueprint Megaways™ slots. However, it is probably best experienced for yourself. It is recommended that you try it first in free play before depositing for real money. Primal Megaways™ free play version is almost identical to the real money version, you just can’t cash out your wins. This Primal slot may be pre-historic, but as you will see in this review, it has not ‘reinvented the wheel’ offering something very tried and tested.

Primal Megaways™ slot is the sixth Blueprint game using the Big Time Gaming Megaways™ license featuring in slots like Bonanza. We’ve had Buffalo Rising and Diamond Mine already and the Primal game Here we have a primeval theme with prehistoric forest as a backdrop and dinosaurs appearing on the grid as we spin along to some dramatic drum beat music. You get some good sound effects as these monsters bellow their approval when they land during winning spins but they do have some teeth too!

Primal Megaways™ slot has a slight difference to the usual maximum of 117,649 ways available because here it’s 46656 ways due to the fact you cannot get 7 rows on the six reels but a maximum of 6 instead. Symbols do appear stacked as we are familiar with on most Megways™ formats with the Mammoth the top pay at 50x stake for 6-of-a-kind. Thereafter the Sabre Toothed Tiger is 5x, Dragon 2.5x, Hog and Elk 2x and the remaining card values either paying 1 or 0.5x bet for six.

Scattered bonus symbols in the form of animal skulls can appear on all reels and Wilds are dinosaur footprints which can appear on all reels apart from the first and have a crucial effect later on as we’ll find out. You get mystery symbols too in the form of flaming caves which can appear over any amount of tiles to reveal the same icon afterwards and hopefully assist with a win. There is no scrolling reel above or below the grid here so all the action takes place on the main reels.

Right – land three or more scatters to earn 10 free games and in them any of the Wilds in view will transform to either a 2 or 3x multiplier if they are involved in any win. Oddly, as long as there is a win all the Wilds will multiply together even if they aren’t actually part of it. This means should you land Wilds on all the last 5 reels you could get a 243x mutliplier at best. If you think that’s mad, when you trigger with 4, 5 or 6 scatters the maximum Wild value becomes 4, 5 or 6x too, which means in the above scenario your maximum multiplier from a 6-scatter trigger could be an incredible 7,776x for all 5 Wilds all showing 6x!

You can retrigger the spins too and just 2 scatters in view gives you 5 more free spins. That’s not all as we have a very different form of bonus guarantee here which means if you fail to win 10x bet in the free spins, you’ll get a guaranteed retrigger of 10 more. Great stuff.

Given that Primal slot has quite a good 96.76% RTP before with even start with the 50,000x bet maximum bonus round win potential. Admittedly the graphics may not be to everybody’s taste but nevertheless there are some good sound effects and animations to be had here. You cannot buy the feature which makes a change to the recent craze from developers and the frequent extra spins can result in an extended bit of fun for the player, although the triggers necessary for those monster multipliers are rare, as you’ll usually get 3 or maybe 4 scatters to trigger it. Yes, I’d say Primal is the primary Megaways™ slot Blueprint have made to date beyond doubt. 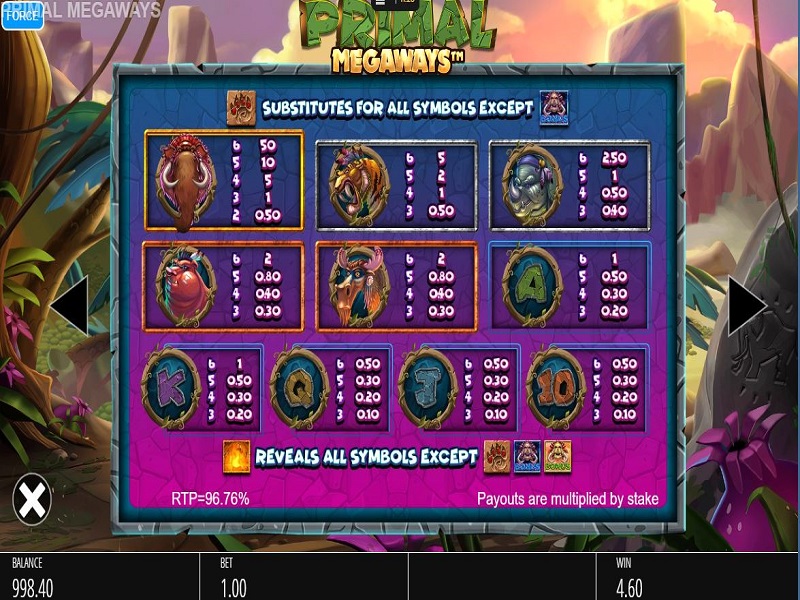 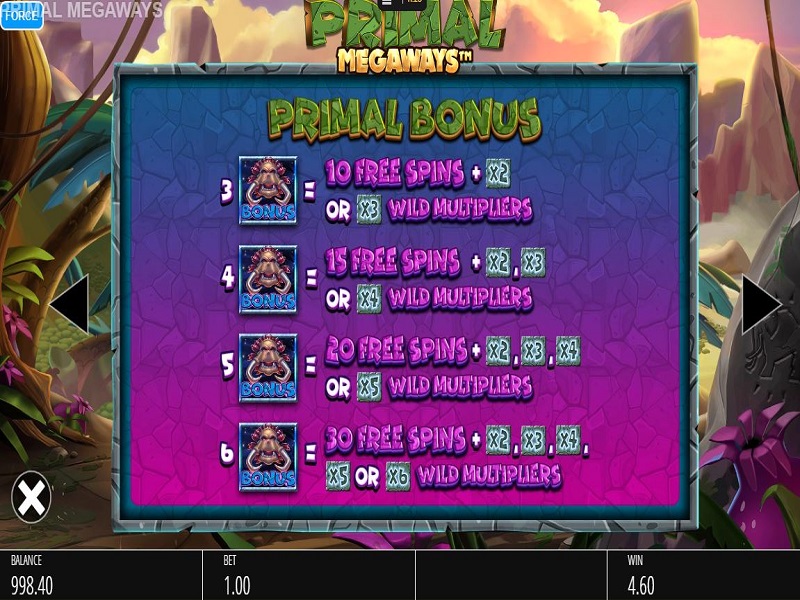 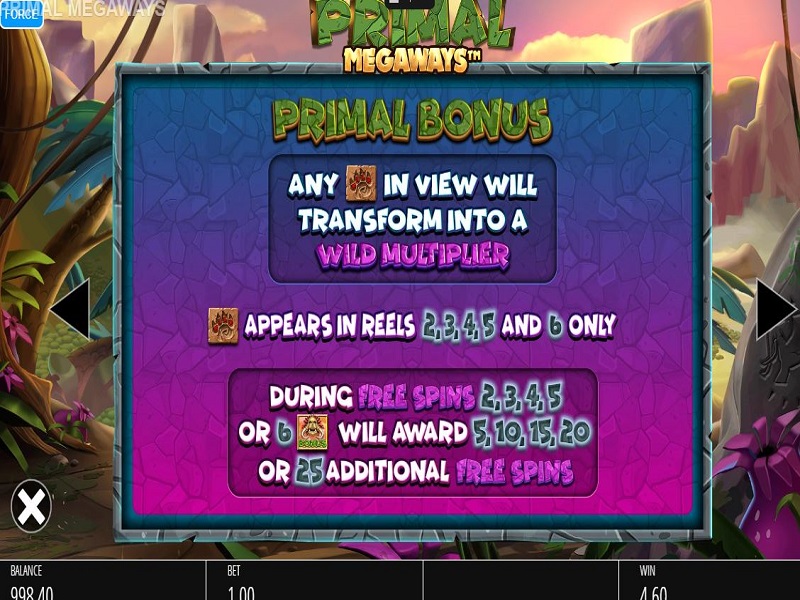 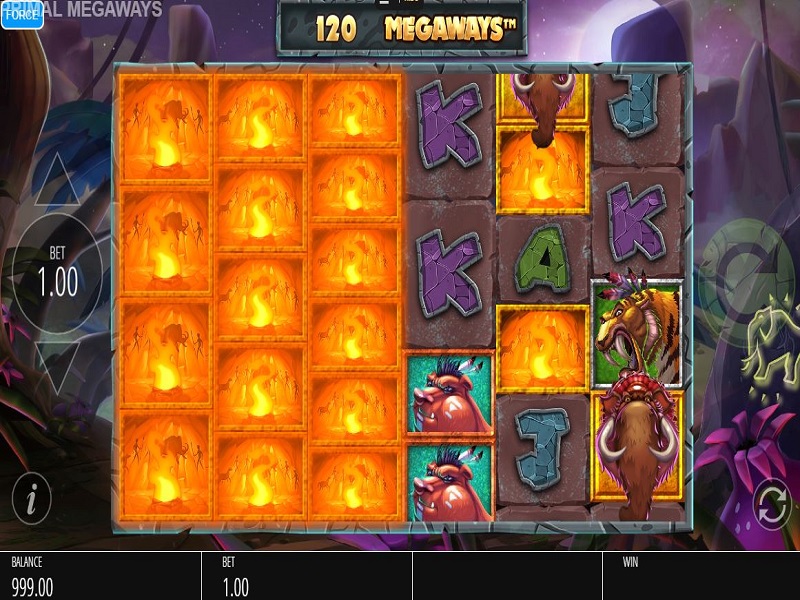 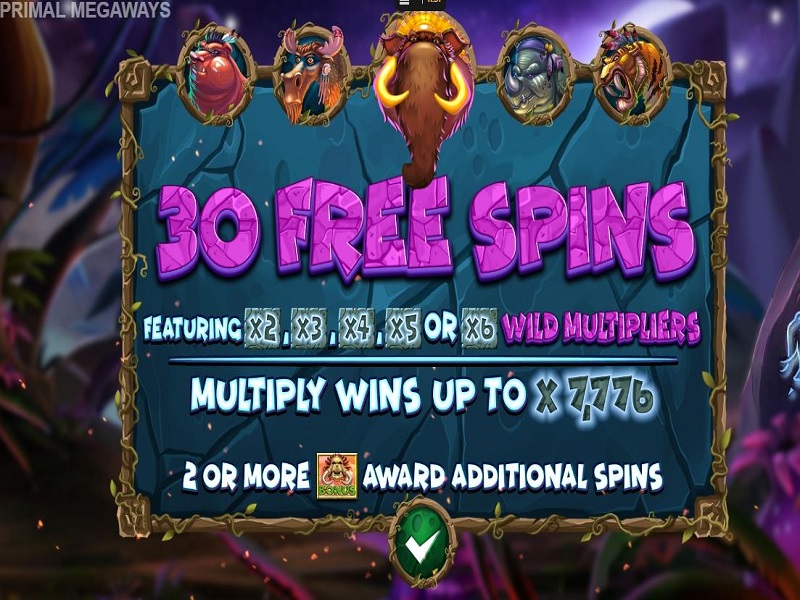 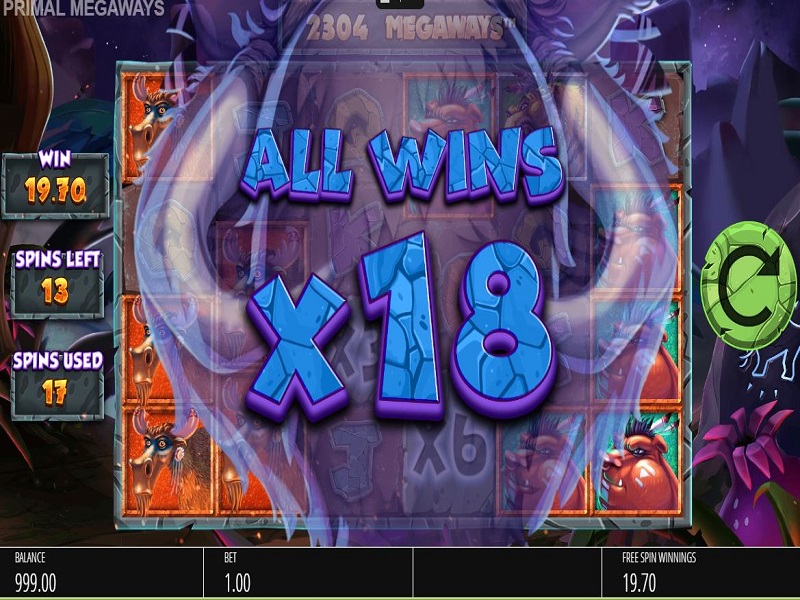 Primal Megaways™ slot has joined a wider lineup of Megaways™ slots titles which appears to be growing quite rapidly. By using Big Time Gaming’s Patented technology, this popular game mechanic is players have really taken to their hearts and are willing to wager regularly on this format of game. Greater number of developers are getting involved with Megaways™, so expect it to be a game format that will be around for some time.

Primal is probably not Blueprint Gaming’s Megaways™ most popular title, with Irish Riches and Genie Jackpots being two that players really enjoy. Each title from Blueprint is not only a different theme, but we are also seeing some different variations of the Megaways™ mechanic.

This Blueprint Gaming slot game has a pre-historic theme with woolly mammoths, sabretooth tigers and other creatures from an era many thousands of years ago. Primal Megaways™ slot is well designed by the developer, offering vibrant colour and creative artwork. The game sounds are in-keeping with the theme and there is a quirkiness to this title which is common with other Blueprint slots.

Primal Megaways™ might not become one of your go-to games, but it is certainly well worth a spin. It’s definitely a Blueprint slot in its look and feel with an all too familiar setup presented on a pre-historic backdrop and accompanied with a soundtrack befitting of the theme.