Queen of Riches Megaways™ slot brings a classic theme to the Megaways™ stable, something that was definitely expected. The game is set within ancient Egypt, offering plenty of mystery and some exciting adventure. By using the  Megaways™ game engine, Queen of Riches is not just another Egyptian-themed slot, it brings lots of winning opportunities and plenty of volatility.

Like many online Megaways™ slots, Queen of Riches presents players with 117,649 ways to win. This has been part of the Megaways™ formula, which makes the game so exciting and also very addictive. The game is also loaded with plenty of other bonus features, which I will come onto in the main review. Big Time Gaming are the developer of the Megaways™ game engine and have released a number of games in this format, such as the mining-themed Bonanza, the medieval Dragon Born and the game show-inspired Who Want’s to Be a Millionaire. 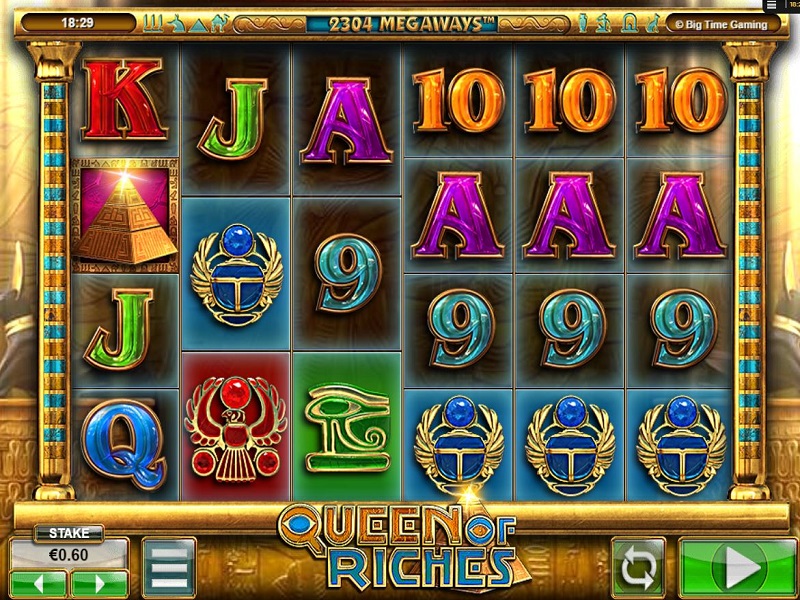 The Megaways™ engine that drives Queen of Riches is one that lots of players are hugely familiar with. However, if you have not played Megaways™ slots in the past such as White Rabbit and Starquest then I would encourage to play this game for free. This is a free play version of Queen of Riches and it really helps me to get my head round it before I deposit and play for real. Especially when I am playing a high volatility game like this one.

Just remember, when playing for free, if you hit a huge win you are not going to be able to enjoy the payout. However, you will also not feel the pain of hitting a losing streak and seeing your bankroll dwindling down to a rather small sum. Most importantly, playing Queen of Riches for free will help you get a good understanding of how all the bonus features work.

Queen of Riches Megaways slot is the one to date that has produced the biggest wins x stake seen on Megaways games. It’s a very simple game and is essentially a monster version of Netent’s Twin Spin and bears no similarity to other Megaways slots other than Starquest as will become apparent if you play them both. The Queen in this case is a version of Cleopatra standing beside the reels and she appears as a full reel stacked Wild in the game too. The theme is a basic Egyptian one with standard BTG spinning sounds so now let’s learn how to get some of this Queen’s riches from her.

We have 6 reels and the rows on Queen Of Riches Megaways can randomly vary on each reel from 2 to 7 therefore 64 to 117,649 ways are possible on any spin. The top symbol is naturally a Pyramid which pays 30x your minimum 0.20 stake for 6-of-a-kind, Blue Ra 6x, Red Ra 3x and Eye of Horus 1.75x. The rest are six card values paying 1.5x down to 0.5x. There are stacked Wilds in the form of the Queen herself which only appear on reels 2 through 6 and when they do a random multiplier of 1 to 7x is displayed on each on them randomly. You get the product of them so two with 3x on will award 9x on any ways they substitute in.

There are no scatters here and the in-play enhancement lies in the reels joining adjacently as in Twin Spin slot. On every spin a minimum of 2 random adjacent reels will spin together and stop showing the same symbols. You can get all 6 reels doing it and this is how you get those huge wins I mentioned at the beginning here. If for example you had a stack of 5 Kings landing you would get 5x5x5x5x5x5 which is 15625 ways of six-of-a-kind at 1.25x and 19531.25x bet as your reward, and it has happened!

Queen of Riches Megaways slot is very volatile and as there is no triggered feature this volatility is all contained within the base game along with its 96.90% RTP. This means your bankroll can diminish seriously quickly while you’re attempting to land one of those insane prizes. It could prove very costly to make this Queen relinquish her riches although when she does, she does it spectacularly. Always be aware of that fact. 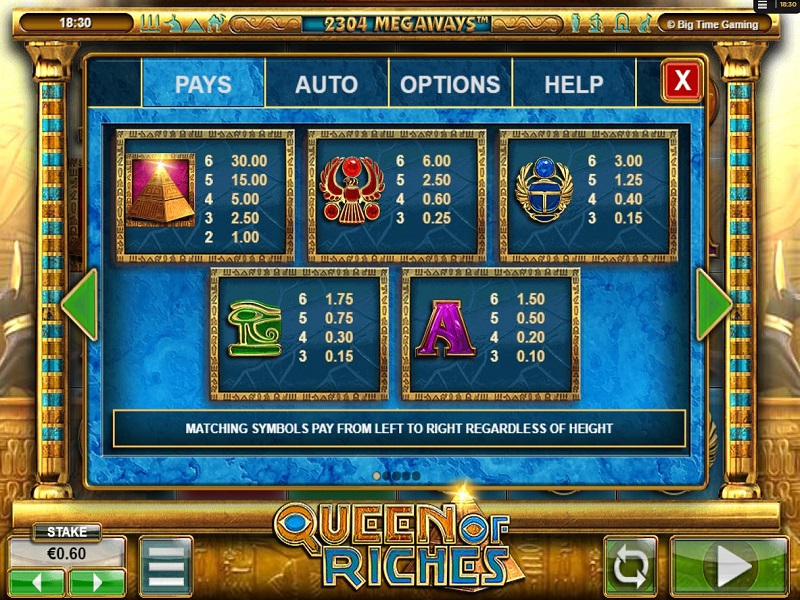 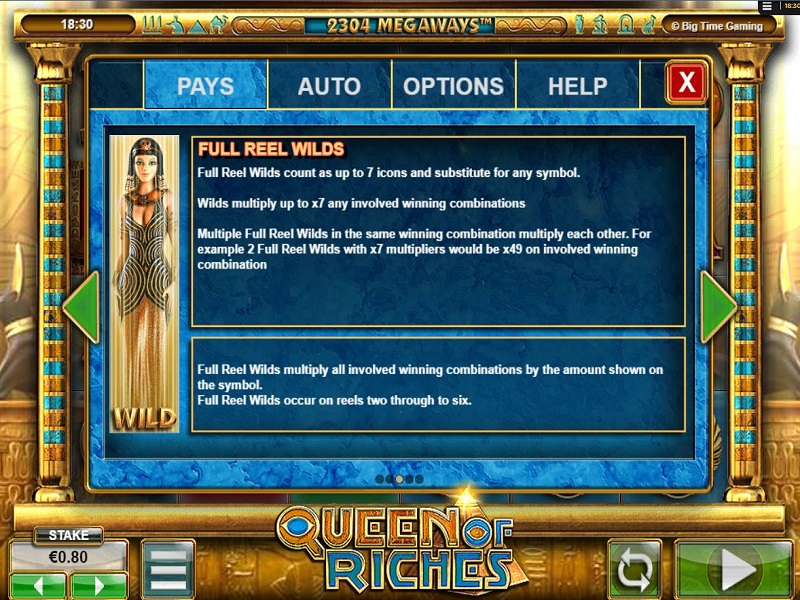 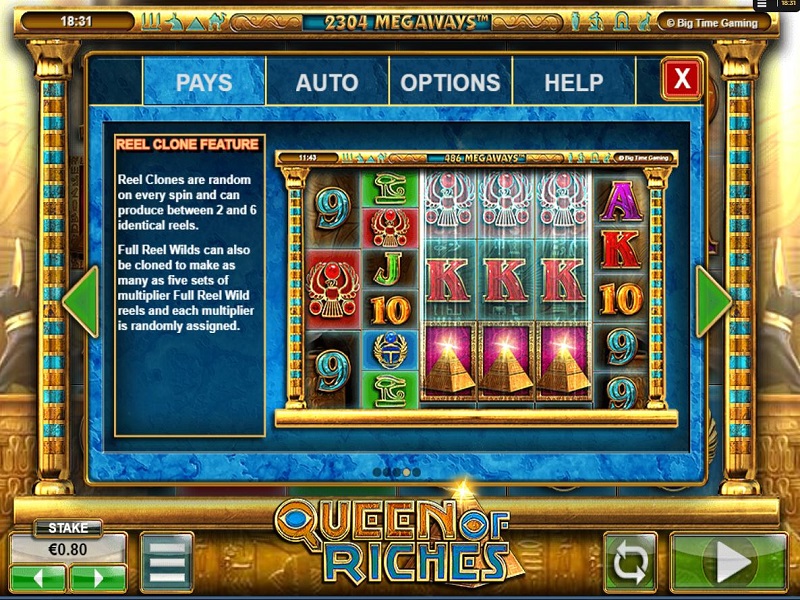 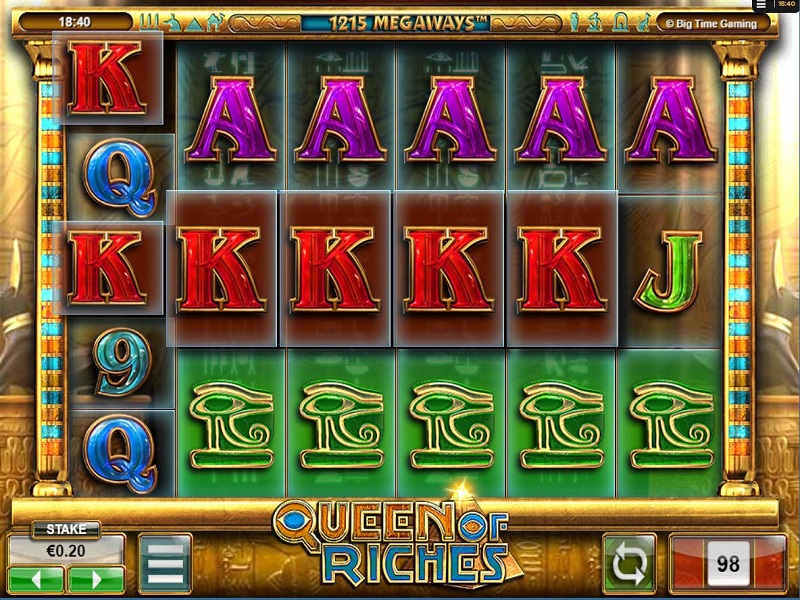 Queen of Riches embraces the patented Megaways™ engine with cloned reels, which in turn, creating some very interesting wins in this video slot. There are up to seven stacked symbols that can be cloned across the six reels to make some very interesting combinations. The full Reel Wilds may also be cloned across the six reels, revealing random multipliers and adding some exciting opportunities to win that are unique to this game.

Many will be familiar with cloned reels in other slots such as Twin Spin, but this is the first time we have seen it used in a Megaways™ title. With each and every spin on Queen of Riches between 2 and 5 reels will be cloned, that is some feature.

The combination of multiplying wilds with cloned reels can result in some really big wins, especially when you land some good wild multipliers. The slot also offers an impressive RTP for a Megaways™ game so you’re always guaranteed a reasonable amount of play time should you carefully manage your bankroll. A warning though, there can be plenty of baron spells in a high volatility slot game such as Queen of Riches so make sure to play at a wagering level which you can afford to play at to avoid losing your shirt. I would have liked to have seen Queens of Riches video slot offer a bonus feature outside the base game, but other than this there is little reason to say anything bad about this game. Queen of Riches is certainly a compliment to the Megaways™ portfolio and is definitely there to stay.