Starquest Megaways™ slot is one of the early releases in this series from Australian developer Big Time Gaming. This intergalactic-themed slot is very much a basic, stripped-down version of their more recent hits such as Bonanza and Extra Chilli. The ingredients are the same, but the graphics are quite simple and there almost feels retro in a way. You still get the benefit of the Megaways™ game engine, which delivers a staggering amount of winning ways.

This is very much a high volatility slot, where decent payouts can be streaky, very streaky! The style of game is more suited to players who are happy to wait for that big win and don’t mind burning a bit of bankroll to get there. Like with many other Megaways™ slots the risk v reward ratio is very high, so you should treat this slot with a lot of respect, otherwise you may end up getting burned by it. 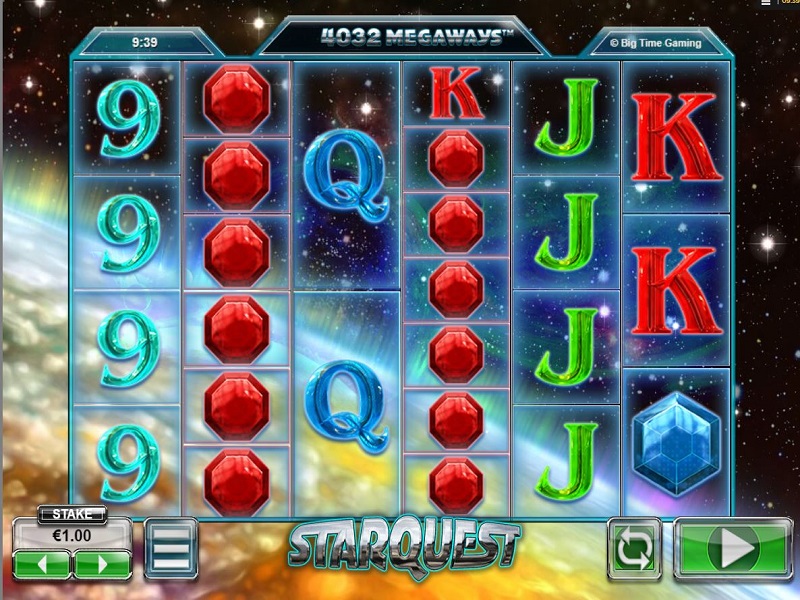 Taking a moment to play Starquest online slot in freeplay is a good idea, as you can get a feel for how all the features of this video slot work without the added pressure of eating into your bankroll. The game is set in outer-space, with planets and distant stars forming the background to the transparent reel set. In my experience this is not a feature-rich game, not like other Megaways™ slots such as Holy Diver or Temple Tumble, however it is quite engaging with the changing reel sizes and some opportunities to land stacked wilds for some decent wins. You can see all this in the free play version of Starquest, so give it a spin before you deposit and play for real.

Starquest slot is possibly the simplest of all Megaways™ games aside from its cousin Queen of Riches. This is because like that game there is no triggered bonus here via scatters, but a simple base game event. We see the same Lady who stands beside the Queen of Riches reels as Cleopatra, but on Starquest slot she’s donned a futuristic silver catsuit and holds a ray gun along with the same smirk on her face. Maybe she’s smirking because she knows what’s going to happen to your money on this very volatile game.

Starquest has single and stacked symbols and offers us the minimum Megaways™ you can get on a 6-reel game at 64, right up to the maximum of 117,649 ways should all the 6 reels land with 7 rows in play. There is no symbol replacement here when you win, what you land is what you get. The game logo is the top award at 15x bet for a 6-of-a-kind win with quite a drop to the Red Gem at 3x, Blue at 1.5x and green at 1x. Six card values pay 0.75x down to 0.4x for the lowest, a 9. A said in the introduction, there are no scatters because we get no triggered bonus feature of any description.

What you do actually get is a respin feature when any Wild reel lands. The Wilds can only land fully stacked and they have a basic 1x multiplier. When one appears, you get any pays then it holds for a respin. In the respin any held Wild increases its multiplier by 1x and if another lands you get another respin and so-on. You only get Wilds on reels 2 to 6. So say you get one reel with a 1x Wild, it holds and you respin with it at 2x. Should another land, you then have 2 Wild reels at 2x and 1x. You are paid and another respin occurs with those 2 Wild reels held at 3x and 2x. Any Wilds multiply each other so in this example any wins landing would have 6x applied. That’s it.

Starquest Megaways™ slot is really a fire-and-forget game. Stick it on autoplay and set a ‘stop if win exceeds….’ limit and see what happens. Like its relative Queen of Riches some huge pays are possible which make it very volatile and it can prove therefore to be a serious balance drainer. Your balance actually could reach the stars here, but your quest could prove very costly! 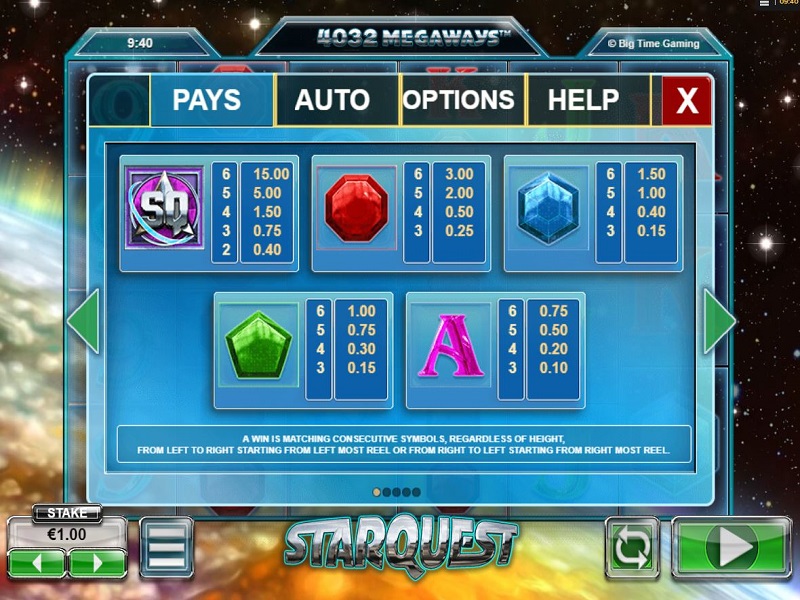 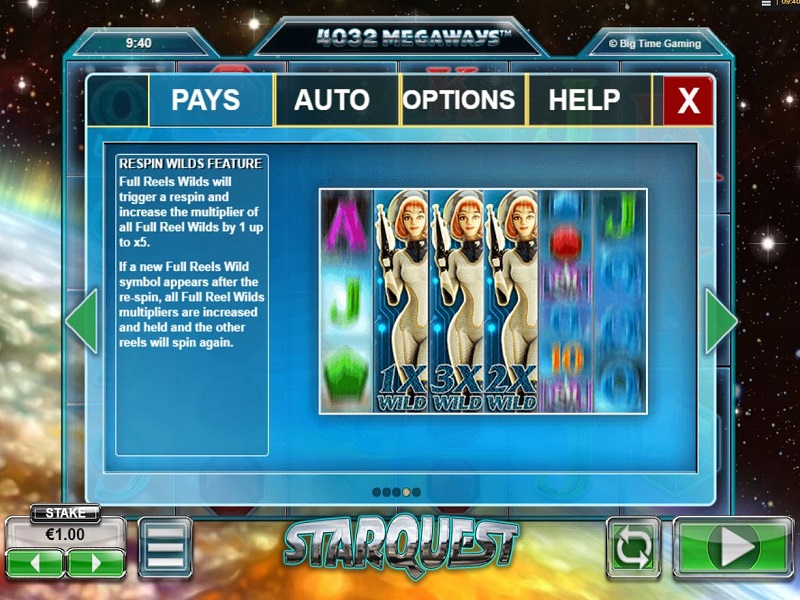 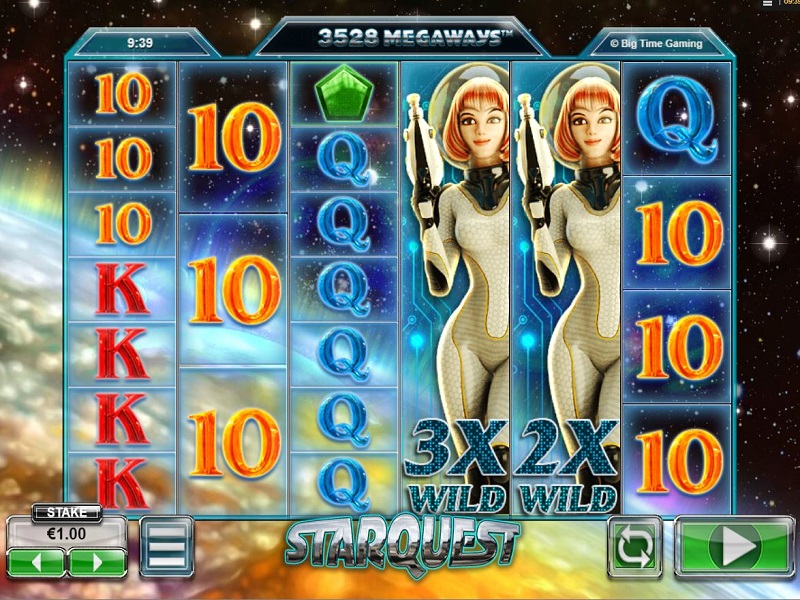 There is something very similar in Starquest to some other BTG classic Megaways™ slots such as White Rabbit and Dragon Born, which will be encouraging for players that have not given this one a go before. It’s simplistic as stated in the review, but it is also a game that has a certain appeal due to some of its key features. Namely the wild reel respins can be fairly fruitful and keep the game exciting. The volatility will be a bit of a turnoff for many players, who will not enjoy going long periods without any note of a decent win. But that is the nature of this slot, it can be mean for long periods, but then bamb! – along comes a massive win and knocks you off your feet.

This slot is very much going to suit a certain type of player, and although I don’t believe Starquest is a poor slot game, it’s just not one I would keep returning to time and time again. Something I will say about this Megaways™ title is that it does hold huge amounts of potential for the lovers of huge wins which is largely to do with it being an extremely volatile slot. It’s definitely a case of seeing how you get on with this slot before adding it to your favourites. Some will love it, but many will not, I can see it having a bit of a cult following for a select few – those that love the huge win potential, no doubt!