The theme of Vikings has been woven into the fabric of online slot games and the Megaways™ title Vikings Unleashed is yet another example. It takes a comic-book look at the famous Scandinavian people who conquered lands and have become the thing of myth and legend. There are a number of popular titles in the Blueprint portfolio which use the patented Megaways™ game engine that was developed by Big Time Gaming. Other examples include Irish Riches, Primal and Thunder Strike, which all have their own individual merits.

Playing Vikings Unleashed Megaways™ slot for free is a good idea, especially if you haven’t played it before. The mechanics will feel familiar to players who have dabbled with Megaways™ slots in the past, but there are other features of this game that will be different and are certainly worth getting used to in the free version first. Once you feel you have understood the various intricacies of Vikings Unleashed Megaways™ then you may want to play it for really money, as that is the only way you can genuinely win big. You must also be prepared to lose when playing for real money, so getting your head round the games features is recommended.

Vikings Unleashed Megaways slot is basically a copy of Blueprint’s previous Megaways™ game, Buffalo Rising. The only real difference is the feature gamble which is far more realistic than those on Big Time Gaming’s Who Wants To Be A Millionaire and Extra Chilli games. The theme is a cartoon style Vikings one and the grid sits over a Viking Longship with seafaring classical music and roars and shouts when wins appear. It seems likely we’ll have a battle on our hands to stop their looting and pillaging here though.

Vikings Unleashed Megaways™ has the usual 4 scrolling symbols above the centre reels with variable reels rows too so we can get from 324 to 117,649 ways to win on any spin. Wilds only appear as singles on that scrolling reel whereas on the main reels all icons bar the Free Spins Scatter can appear stacked. There are random stacks of shields which can appear during any spin and wherever they land they transform to all reveal the same symbol, a modifier Blueprint Gaming first introduced on Diamond Mine.

Pays for 6-of-a-kinds here range downwards from the Warrior with Golden Spear at 50x stake, Redbeard 7.5x, Lady and Wizard 2x plus 6 card values giving from 1.75x Aces down to 0.8x for 9’s. Grey Rune scatters are on all reels and you can get a maximum of 27 spins for 7 in view, but the usual trigger is 12 spins for 4 in view.

Assuming the basic trigger of 12 spins for 4 scatters, you’ll see two wheels, the left one with spin quantity and the right one with multiplier. The red segments lose and you can gamble on each wheel you choose to increase either spins or multiplier and collect at any combination you want. The red losing segments get smaller the more winning gambles you make and the maximum outcome is 27 spins beginning at 10x multiplier.

There is the opportunity to buy the basic 4-scatter entry at 100x bet, plus the option for buying cheaper feature entries at 5 spins for 25x bet, 8 spins 50x bet and 10 spins 75x bet. In all case the gamble wheels are available afterwards but again you can lose all the bonus for any red segment on either wheel. You start the multiplier wheel on 1x in all cases too.

Vikings Unleashed Megaways™ slot has nothing new as we’ve seen the mystery symbols before and also the feature purchase. The only real difference this game has is the different levels at which you can buy the feature as described above and the fact you have two separate gambles for the spins and multiplier which see to be accurately depicted in the graphics. The RTP is 96.50% which can increase slightly to around 96.90% by exclusive use of the feature purchases. It sounds OK but overall the theme and graphics are rather childish though as with all the Megaways™ slots you have some huge win potential. The bonus gamble is the only reason I’d choose to take on these Vikings again in future. 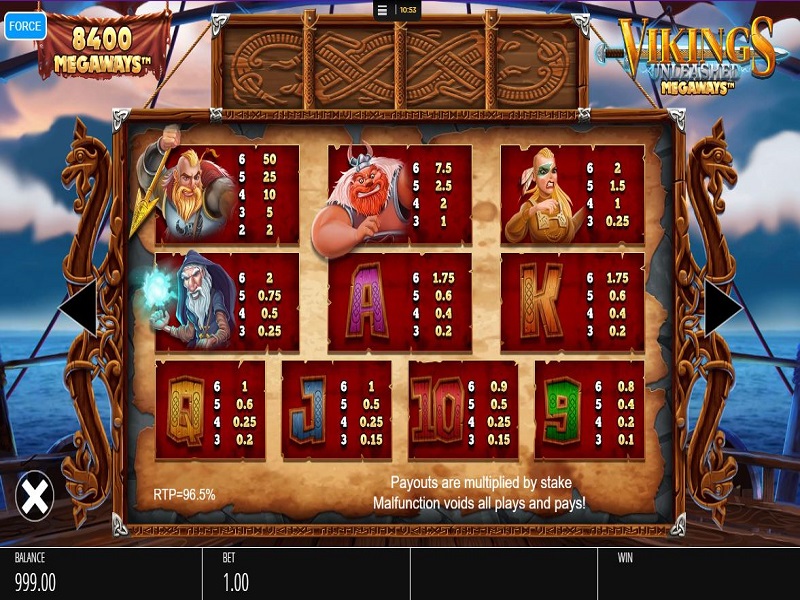 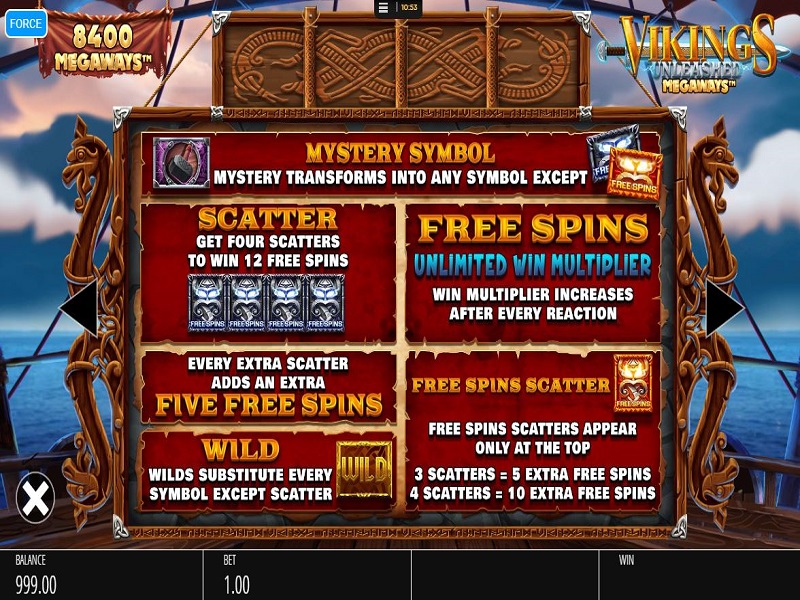 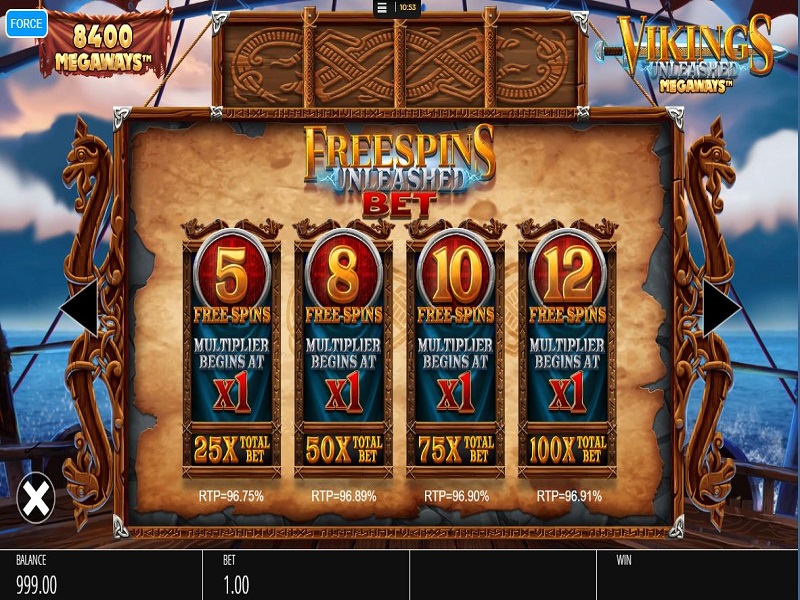 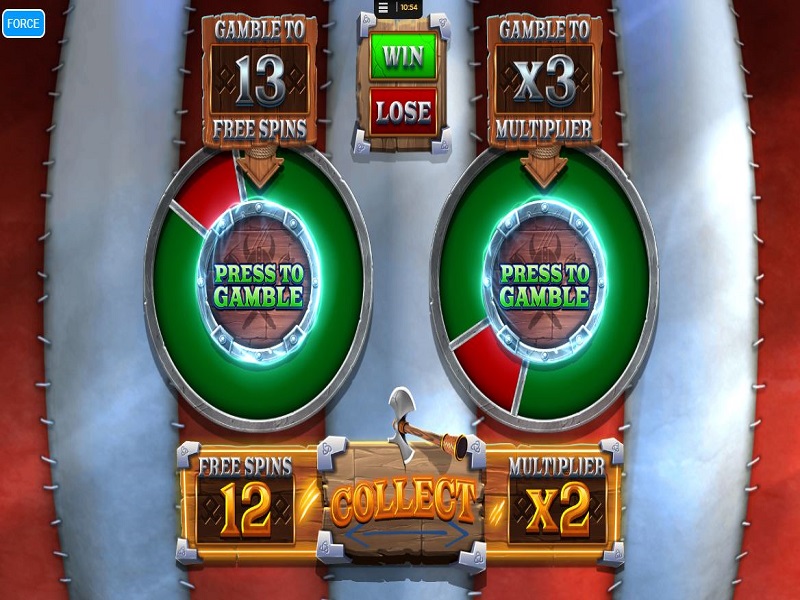 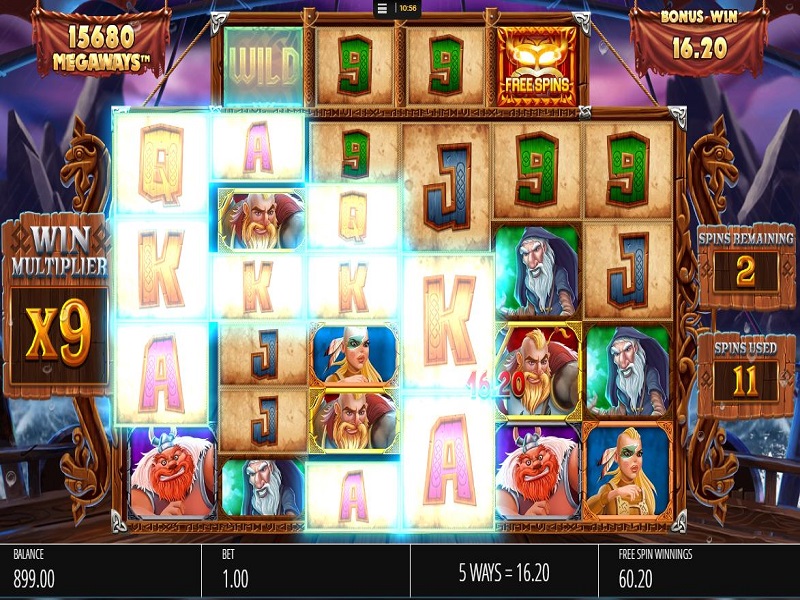 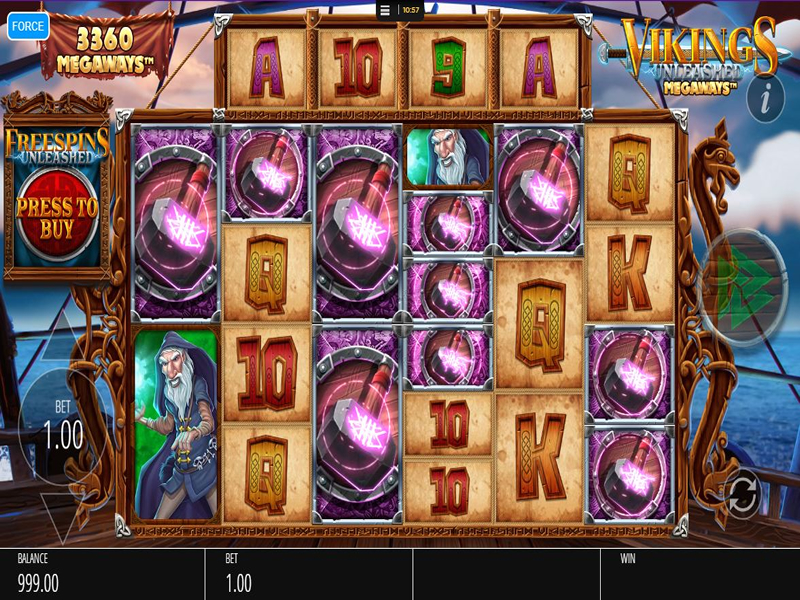 Vikings Unleashed Megaways™ yet another Blueprint game using this special game engine. From cascading wins to countless ways to win, this online slot will endeavor to keep you entertained. The theme of the game and its particular format also add to the allure of Vikings Unleashed, with a bold, striking soundtrack and bright, vibrant graphics. You can play Megaways™ Vikings Unleahsed slot using both desktop and mobile devices. I would personally not be bothered either way here, as the game looks pretty good in a smaller version as it does in the full size game on your PC or laptop. Like many other slots, when this slot game is scaled down to fit onto a mobile device, many of the controls and settings are tucked away in the navigation. This is not a problem though, as they are typically easy to get to

As you’d might expect, Vikings Unleashed Megaways™ does fall into the category of ‘high volatility’, meaning wins generally take longer to arrive. The pay off is that when they do come in they can be pretty big. Potential wins of 10,000x can occur on every free spin. You should be cautious though, as the bigger the potential win, the more likely it is that you can spend a lot of money before you see anything – Vikings Unleashed is certainly no different. Visually this game is very appealing and I like the mystery symbols you get in the base game. The main bonus feature in Vikings Unleashed is the Battle of the Seas Free Spins, where you will generally find bigger wins in this game. If you are a big fan of Vikings then you will probably be drawn to this one, but there are arguably much better Megaways™ slot games out there if you look around.