White Rabbit Megaways™ slot appears to have a similar theme to the stories about Alice books written by author Lewis Carroll. Developer Big Time Gaming hasn’t said as much, but you can tell by characters involved and the styling of the game that there are a lot of similarities with the famous fictional tale. This Megaways™ title is very beautifully designed, offering gentle accompanying tunes as you glide through your game. Should you trigger the free spins game and there is a chance of activating 248,832 ways to win. There are also additional wilds, as well as wild multipliers that can increase payouts by 3x. This is a welcome addition to the Big Time Gaming line up and will certainly win over a few new fans once you have had a chance to play it for yourself. 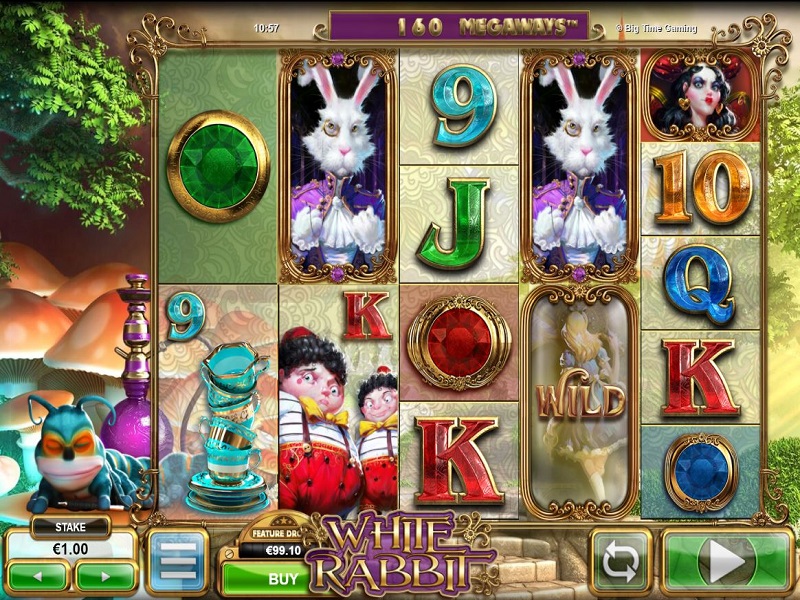 You can play Big Time Gaming’s White Rabbit slot for free, as you can do for many other Big Time Gaming slots such as Holy Diver and Who Want’s To Be A Millionaire. By playing the free demo version of White Rabbit you can experience all of the game’s various bonus features and build up a feel for this game. The White Rabbit slot in free play plays in exactly the same way as the real money version, the only thing missing is the huge payouts should you win. The upside is that you also don’t drain all your funds getting to grips with this game. Try it for free first before you deposit and play for real.

White Rabbit Megaways™ slot from BTG seems to combine elements of both Dragon Born which was their first Megaways™ game and Bonanza together. The theme is based on Alice in Wonderland and therefore the reels lie over a storybook background and a sleepy caterpillar sits to the left of the grid, smoking a suspicious substance through a hookah pipe. The sounds are quiet music with drum rolls when certain wins land or the caterpillar comes to life, but will your money go to pot too?

On White Rabbit we don’t begin with 6 reels but only 5 reels with 2-7 rows on each, so our ways range from 32 to 16807 every spin. The symbols are stacked in different quantities with the top 5-of-a-kind pay being The Queen at 25x bet. Red Gems pays 5x, Blue and Green Gems 2x with six card values at 1.9 down to 0.6x bet. White Rabbit scatters are on the centre 3 reels but our pal the stoner Caterpillar has something for us first!

Wilds only appear as singles here on reels 2 to 5 but sometimes the Caterpillar wakes and blows one or more smoke rings onto the grid. These land on random tiles and reveal 2 or 3x multipliers too. You can get one useless one which doesn’t create a win right up to all the reels 2 to 5 getting a 3x which would make an 81x multiplier.

BTG Logo Gold coins can randomly appear on the reels which reduce the price of your Feature Purchase by 0.2 to 2x stake each time. This means you effectively have a guaranteed trigger, but it takes a long time. If you cannot wait for the 100x bet buy price to whittle down, or are impatient for the 3 Rabbits to drop in, you can buy it using a button.

However it is you trigger them, you get 15. Your reels will now be set at a minimum of 3125 ways but can be anything up to over 10,000 ways depending on what it gives you when triggered. No Rabbits now but Cupcakes appear on the reels and each one increases the height of that reel by 1 row. When it gets to 12 (rarely) you get a clock retrigger which gives 1 to 12 extra spins. This can occur on all 5 reels and if it does you would end up playing the remaining spins on a 248,832-way grid! As well as this, any reel attaining 12 rows and creating a retrigger will become a Royal reel thereafter with more stacked Queen Mary on them. Retriggers tend to mean massive wins here.

White Rabbit slot has a very high 97.44% RTP which will increase to 97.77% if you play it exclusively by buying the feature. This is as mad as the Hatter is though and you can get some sizeable wins in the bonus by waiting to trigger it in normal play. The graphics, mechanic and sounds are great with a hugely entertaining bonus although it’s quite hard to see those retriggers here. I’m not saying you’ll end up in Wonderland if you play White Rabbit, but it can be fun trying. 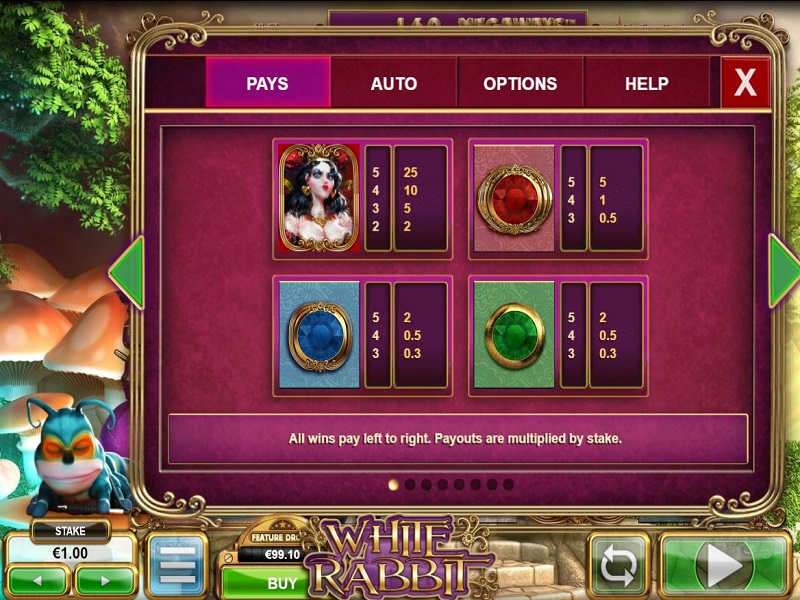 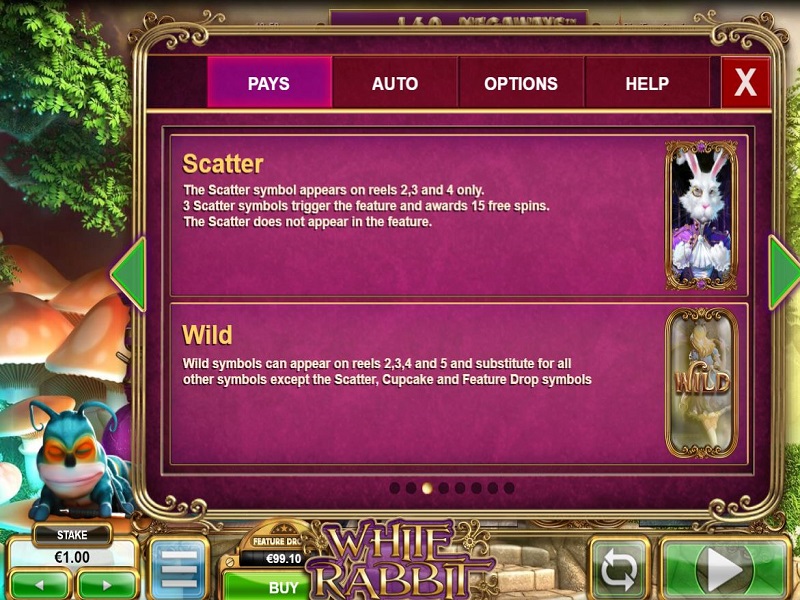 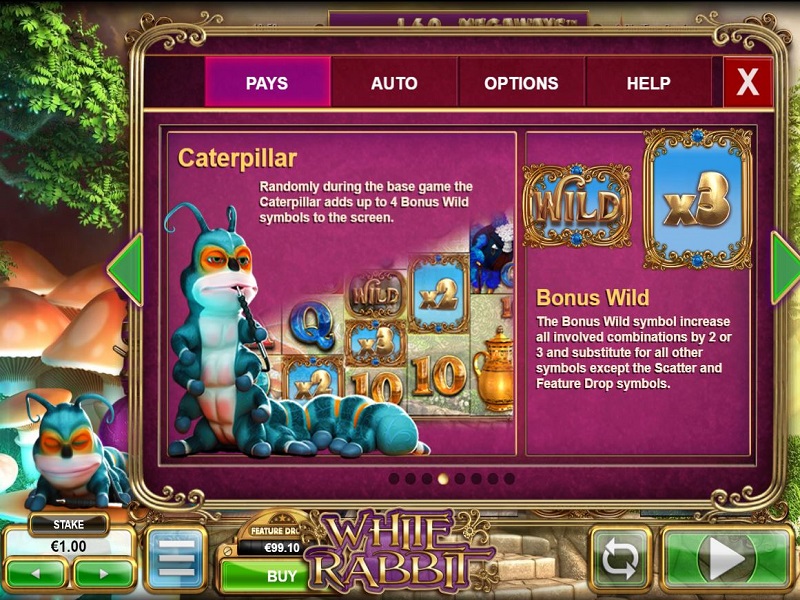 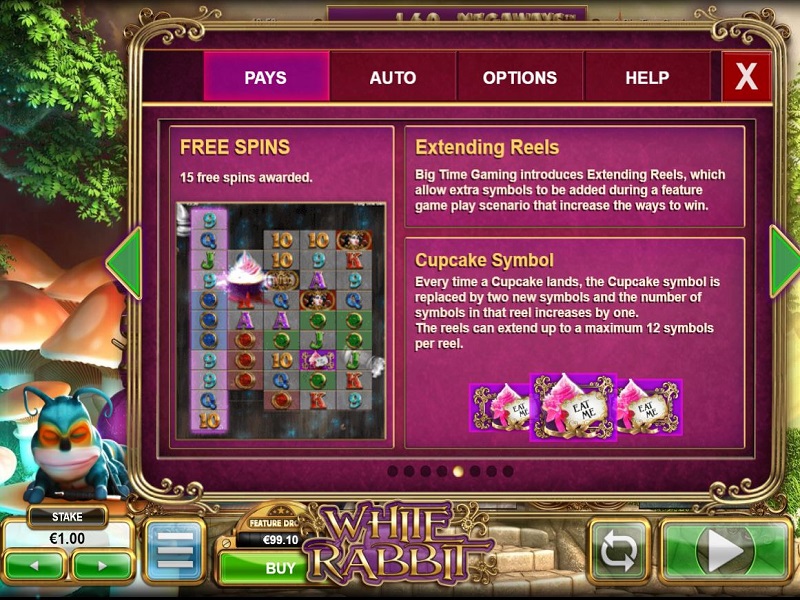 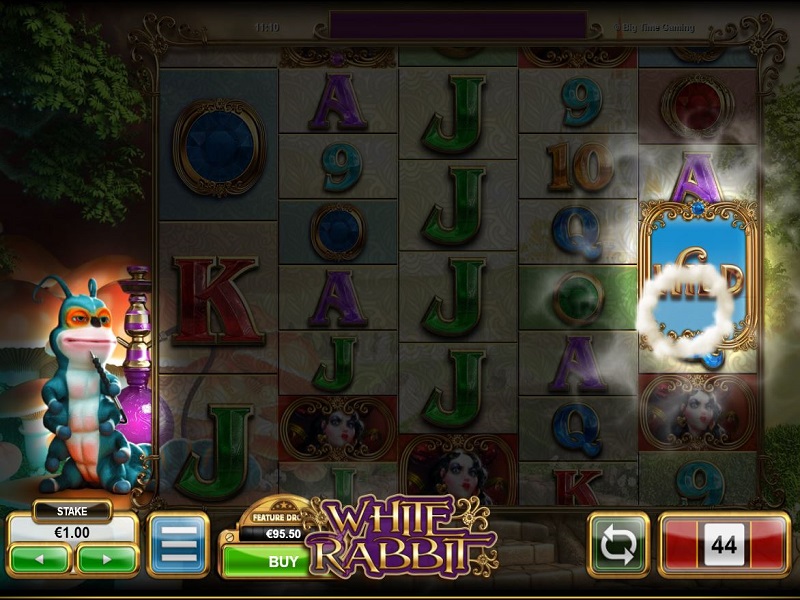 The design of Big Time Gaming’s White Rabbit slot has a very surreal feel. The reels are set against a forested backdrop packed with ancient trees and great big toadstools. There are lots of Lewis Carroll references in the game, despite no claim to being anything to do the the popular fictional tales. Examples include the Mad Hatter, Tweedledum, Tweedledee, Dodo, and Cheshire Cat. Of the symbols, the most rewarding is the Red Queen who pays 25x your bet for 5 on a payline. White Rabbit is by far one of the more adventurous games in the Megaways™ lineup for Big Time Gaming and is arguably one of the better slots in the wider portfolio. It may not deliver the huge win potential of Bonanza or Extra Chilli, but for an entertaining slot game with plenty of chances to win big, its certainly a very enjoyable option.

Megaways™ is a particular gameplay formula that has been mastered by developer Big Time Gaming. What it offers is a thrilling white knuckle ride, which can be both thrilling and also freighting, especially if you get on a bad run. In most Megaways™ games that offer expanding winning ways, the wins must expand all of the reels. However, this is not the case with White Rabbit. What happens instead, the reels stay the same but the symbols change. Each of the reels can feature a total of 7 symbols, and the overall number of symbols that can appear on each reel alters the number of ways to win from one spin to the next. Therefore, you never really know how many winning ways you’ll get every time you hit the spin button. A grand total of 16,807 ways to win can be activated if all reels show 7 symbols at the same time.